My bikini days are definitely over! (Stacey)

I’m a 25 year old mother of 2 amazing little boys, and a gorgeous baby girl. I got pregnant at 18, and had my oldest at 19. I was 110lbs when I got pregnant with him, and when I had him was 153. I gained pretty much all in my stomach, and breasts. I have stretch marks from my breasts, to my knees.. Literally! I ended up having an emergency c section after 31 hours of labor. I used to think I was a failure because I could not dialate, and give birth the “normal” way, but I’ve honestly come to terms with that now. I had a pretty OK scar from my first birth. It never really bothered me. I did have a little extra skin from getting so big, then losing so much weight. I went back down to 107 shortly after I had him.. Then eventually settled at 115. Then I married the most incredible man a few years later.. I’ve known him my whole life, but had moved away when I was 12.. We reconnected because he had joined the Army and was stationed only a few hours from me. We got married in August of 08 and started working on adding to our family immediately. Got pregnant right away, but then we lost that baby shortly after finding out we were expecting. We got pregnant again a couple months later with our youngest little boy. He was born in July of 09 when I was 24. Then.. The extra skin that I had, turned into a FLAP! I was 120 when I got pregnant with him, and only got down to 130.. When he was 6 months old.. We got the crazy idea in our head to try for a little princess.. We tried one time, and I changed my mind on the timing.. But we found out a week later we were pregnant. We were still thrilled. I only gained 18 lbs with her. I figure it’s because of my Gestational Diabetes, and the medication I was on.. Not to mention I had a 5 year old and a little boy under a year to chase.

Anyway, we had our little girl in October 2010 (she’s 2.5 months old now) and I lost 28lbs total so far.. So I lost hers and my youngest sons pregnancy weight (thaaaaaaaank you breast feeding!) I honestly could care less about the stretch marks anymore… And I have a pretty gnarly scar from my second OB/GYN who just sliced however he felt at the time.. My 3rd OB/GYN tried to fix it.. But she could only do so much.. Still.. I’m not that bothered by the c section scars. It’s the extra skin that gets me so down. I have pretty much no self confidence anymore. I mean, I have a pretty face (or so I’m told) and my boobs.. Well they look good clothed anyway.. Of course they’re a little saggy from having 3 kids, but I’ll live.. But I literally have to tuck my stomach into my pants.. Sometimes it hurts, too.. From the scar, and the skin being pinched sometimes. I see a lot of girls who just snap right back like a rubber band after having a baby, and I just want to bawl up in a corner and cry. My husband is hardly ever home. He’s always deployed, serving our wonderful country. I’m so proud of him.. But when he is home, I just never want him to see me naked. He’ll want to keep the lights on when we’re intimate.. And I want it pitch black.

Am I ever going to be OK with the way I look? Is it ever going to get better? I really want to get a tummy tuck… But I’m also pretty sick of having surgeries. I want to say a quick thank you to the person who opened this web site though. I really felt alone in these feelings for years, but I see there are a lot of wonderful mommies out there going through what I am.. And it’s so amazing to see so much support. Thank you from the bottom of my heart!

Those are both after my second child.. I look the same now, but a little less weight.
My gorgeous children 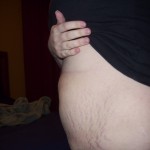 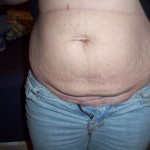 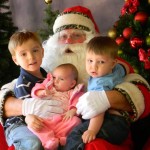 Next post: Is that a football in your belly? No, it’s just extra skin. (Erin)