I was 14 years old and dateing this 16 year old guy. we were going out for about 2 months, and he invited me over to his house while his parents where away. i was kinda sketchy about it, but i trusted him, so i decited to go to his house. while we where in his basement, he asked if i wanted to have sex. I told him that i’m not ready yet, and he just kept on asking me. he promised he would use a condom. he finaly got me to, and he got ontop of me. after about a minute, it didnt feel right. i could then tell he wasnt wearing one. i tried pushing him off of me, but then he started to get aggressive and held me down. i told him to get off of me, and he said that if i didnt let him finish, he would tell my dad i was sneaking out with him and doing drugs (which i smoked pot once before that. and i DID end up getting caught anyway.) so i was in shock, and about 10 minutes later, he got off me. i was disgusted, and just left. i called him up the next day and told him im breaking up with him. i was afraid to tell anyone of what had happened.
a month past, and my period was late. i started getting morning sickness. i was going out with another boy when i found out i was pregnant. he was the first person i told, and he said that if i didnt get an abortion, he would break up with me because he didnt want to be embarassed by having a “fat” girlfriend. he was my only friend at the time. my dad never spent time with me, and my mom had passed away about 3 years before that. my brother was moved out of the house, and i was a lone.
the day after halloween, i sat my dad down and told him i was pregnant. he went out and got a test, and i took it it came up “pregnant”. at that point, reality hit me. i was going to have a baby. i was going to have an abortion. i thought i would do it before i started to show. that night, i realized im resposible for 2 people now. i fell in love with the baby.
i told my boyfriend im leaving him before he left me, and i was going to give birth to this child. so he was gone. a long time friend came around, and we started talking a lot. his name was dustin. i finaly told him about 2 weeks later that i was pregnant. he was in shock. i had told him what happened, and he was there for me. (and now were dating (: )
i decited i needed to give my baby up for adoption. i wanted to keep him, but i wanted him to have a dad and a mom that will be there all the time for him. me and my dad found a couple through an agency. loriston and lisa where their names, and they were the perfect couple i have ever seen. we met up with them. they were so nice. i chose them.
i went into the 20 week ultrasound, and guess what? ITS A BOY!!. i was so excited. the family was also excited.
on june 18th at 7:11 i gave birth to a healthy 9lb 10 oz baby. we named him Torren Dwane Reed.
this is me at 40 weeks 3 days (a day before being induced. june 17th, 2009) : 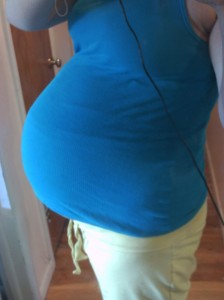 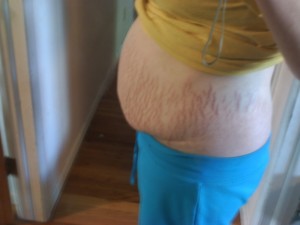 the mom gave me a teddy bear from build-a-bear workshop that if you squeeze his chest, you can feel a pulse of a heart. they also gave one to Torren.
i love the adoptive family.