Grateful for My Blessings (Tsi K.)

This is my third entry on this site. My most recent was about two years ago after the birth of my daughter via c-section, and I’ve since had another baby so I decided to share again. Prior to the birth of my first child, I had always struggled with some form of disordered eating. My body has always been strong and athletic, and whilst I appreciate it now, I had a difficult time dealing with it growing up. At age six, I wanted to be waif like, like my friends. I wanted thinner thighs, a smaller belly, and a teeny-tiny backside. It didn’t help that my relatives would tease me about my ‘big bum,’ or ‘thick legs,’ thinking all the while that they were complimenting me. Growing up in a country where thickness was actually admired and revered on a woman, I’m not quite sure where I received the messages that I was too fat, or that my body wasn’t ‘good’ enough. However, receive them I did, and those messages plagued me well into adulthood. After many years dealing with bulimia, I finally resolved that enough was enough and became determined to fight back at my demons. I was afraid that if I didn’t fight back, I would eventually have children, and pass my bad habits onto them, especially if I had girls. I thank God that I was able to regain control of my eating, and in essence, my life, before my little girl was born in 2006. And wouldn’t you know it? Her body is an exact little replica of mine, right down to the sturdy little thighs and the round belly. I let her know daily how blessed she is to have strong legs with which to run and jump and dance, and strong arms which can lift and carry and throw. Here in the States, my fight for my daughter’s sense of self-worth is two fold. The images of ‘beauty’ portrayed in the media are typically those of thin, tall and willowy Caucasian women. I am therefore not only fighting against the images of ‘thinner is better,’ but I am also fighting for my daughter to see the beauty in her brown skin, and thick, textured hair.

Although I put up a brave and confident face for my daughter, which most of the time is an accurate representation of how I feel, those negative thoughts still come back to haunt me from time to time, and so they did with the birth of my son. I gained weight slowly and steadily for the first three months with my boy, and then began a rapid descent into eating anything and everything that I could lay my hands on. I comforted myself with the knowledge that I had gained 50lbs with my daughter, and had managed to lose most of it by the first year. My Dr. told me that whilst such excessive weight gain was mildly acceptable for a first pregnancy, the same should not be repeated in a second, so when I surpassed 50 and landed at a robust 60lbs, the fear of not being able to lose the weight set in. My son was a special gift from God, having been born exactly one year to the day of a devastating miscarriage. I told myself that I would therefore not focus on the excessive weight gain would focus instead upon the nurturing and nourishment of my ‘miracle baby.’ I’m currently breastfeeding him, as I did my daughter, and I believe that this must be the reason why I’ve been able to shed so many of the the pounds in a relatively short period of time. I am proud of my body and all that it has accomplished, and although my feelings about it will forever ebb and flow, I can only hope that one day my children will look at me and tell me that they are proud of me too.

The first picture was taken three and a half years after the birth of my daughter.
The second was taken at eight months pregnant with my son.
The third was taken a few days ago at 8 months postpartum.
The forth is a picture of my little angels :-) 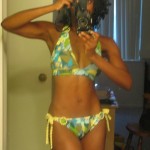 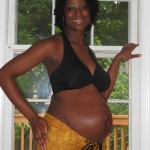 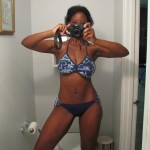 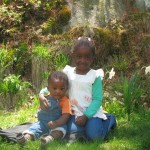