Struggling With My New Body (Alexandra)

In October of ’09 my then boyfriend and I found out we were expecting. He proposed, and we planned the wedding for 2 weeks later. On Halloween I was at work and started spotting. I panicked and went home. The bleeding never stopped, and the next day it became very heavy. Six days before our wedding at 7 weeks pregnant, I lost the baby. We went ahead with the wedding and it was wonderful. After the miscarriage I begged my husband to try again to get pregnant. I was obsessed with getting pregnant and could think of nothing else. As the next few months went by we found out he would be deploying in August and in late February I decided now was not the time to get pregnant. Well low and behold I was already pregnant. My pregnancy was flawless, we even found out my husband was going to deploy in August but December/January. We had no worries, no problems, no nothing. During the next 9months I put on 58lbs. I’m still not sure how I gained that much weight. I struggled with the stretchmarks, and my poor husband did everything he could to help me feel better. Two weeks prior to my due date my water broke. The labor did not go as planned but despite the complications my son is now a healthy happy little boy. After we left the hospital I kept telling myself the weight would just fall off, that’s what everyone had told me. And for the first 2 weeks it did. I went down to 184 in 5 days and then to 172 the next week, but it seems as though i have hit a wall. For two weeks my weight has stayed the same. I see my friends who gave birth within a week or two of me back in their pre-pregnancy jeans and it hurts. In the beginning I said I wanted to be back at my high school weight of 135 by the time my husband gets home from Afghanistan in July. It seems to far away and almost unachievable. After my son was born I stopped caring about my stretchmarks, which is nice. I realize there is nothing I can do with them but give them time. I just wish I could accept this new body. I look in the mirror and I don’t really mind what i see all that much. I don’t hide my body from my husband but the thought of staying this weight upsets me. I know its only been 4 weeks and maybe I had unrealistic expectations after the first 30lbs came off so easily.. I just hope i can accept my new body and be ok with possibly never being a size 3 again. 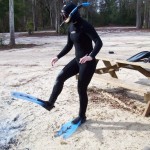 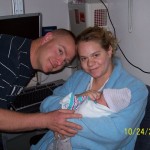 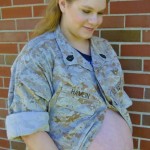 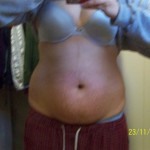 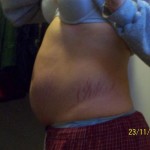 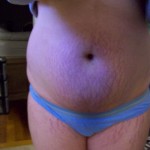 Previous post: Holding My Son Makes it All Go Away (Erika)