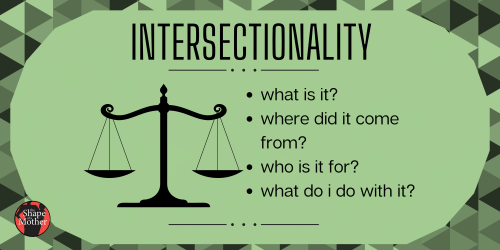 When I say that I practice intersectional feminism, I am specifically aiming to let people know that I eschew the erasure inherent in traditional “white feminism.” I am aiming to communicate that I recognize that Black women have different struggles than I ever could and that my goal is for my work to be inclusive of their needs and history as well. Because it’s not equity if it’s not for everyone.

However, I want to also recognize that I am willing to be corrected by Black women, or members of other marginalized groups I am not a part of, if ever I misstep. You cannot claim to practice intersectional feminism if you are not open to being corrected. We are all learning and unlearning, myself included. And when we know better, we must do better.

So what is intersectionality? Let’s get into it.

Kimberlé Crenshaw is a professor of law at Columbia University and UCLA. She coined the term to “describe the double bind of simultaneous racial and gender prejudice,” particularly in regards to law (1).

At the time courts recognized either sex or gender discrimination, but not both. Crenshaw cites three court cases that highlight how the *intersection* of race and gender compound to make Black women’s experiences more challenging than either Black men or white women.

Crenshaw cites the lawsuit DeGraffenreid v General Motors. GM did not hire any Black women before 1964 so when they had seniority-based layoffs in 1970, all Black female employees were fired (2).

The women tried to sue but because GM had hired white women and Black men previous to 1964, the courts refused to see the sexism or the racism, saying “[P]laintiffs have failed’ to cite any decisions which have stated that Black women are a special class to be protected from discrimination.” (qtd in 2)

So Crenshaw coined “intersectionality” to describe how multiple marginalized identities can erase a person’s struggles and keep them from accessing justice.

The more marginalized identities a person has, the more likely they are to face oppressions. It is important to disaggregate data: remember that when people say women are more likely to be victims of violence, that likelihood rises for women of color or trans women. Not all experiences of womanhood are equal.

While it is true that one does not have to be Black to have multiple oppressed identities, feminism in the US and other culturally-related places has a long history of excluding Black activists. Because of that, it is vitally important to remember that “For many, intersectionality has always been, and should continue to be, synonymous with US Black feminist theory (3).”

So what does this mean for feminists, especially for allies? First, remember that while we may hold multiple marginalized identities, we must still recognize those we do not hold and make space for them. For instance, I may be a disabled woman living under the poverty line (and that is significant!), but I am not a Black woman and I need to make sure I am making space for Black women and not talking over them or pushing them out of the proverbial tent. Need specifics? Keep these goals in mind and aim to make them a habit in your daily life:

Feminism is in direct opposition to patriarchy. The patriarchy holds power with white supremacy and capitalism, therefore feminism must oppose those as well. Because for too long feminism has aligned itself with white supremacy and capitalism, we must actively and aggressively embrace intersectional feminism. Because we are not free until all of us are free. Patriarchy is bad for everyone, even the men who hold the power. The same is true for its bedfellows.

in Activism, education, infopost, My Own Ramblings
0 comments… add one

Next post: Every Now And Then I Fall Apart