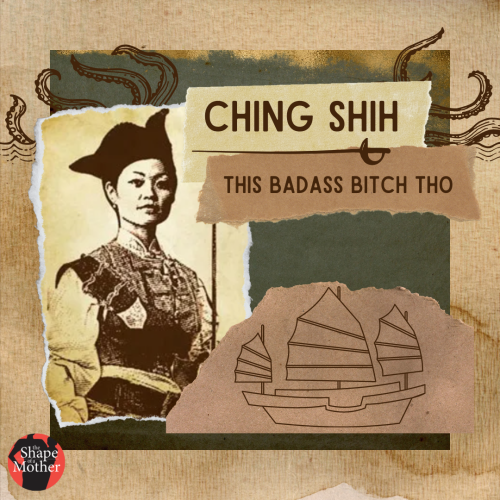 Y’all. I heard “female pirate” and basically I was sold on this badass bitch, but after doing research I honestly feel like she may be the badassest bitch I’ve covered here and I can’t wait for you to meet her. Let’s go!

Wikipedia claims she was born as Shi Yang, but other, scholarly sources claim we do not know her birth name (2). Today she is known primarily by Ching Shih or Zheng Yi Sao, or sometimes Ching I Sao, which translates to Cheng I’s Wife or Cheng I’s Widow.

Full disclosure, I have tried to figure out which is the most correct translation of her name into English and I cannot find a source which discusses the variations so I do not know if one is more accurate/respectful than the other or if all are equally acceptable. If you happen to know, do please drop me a comment (and hopefully a source!) and I will edit this essay and all social media posts because accurate and culturally respectful histories are of utmost importance to me.

In any case she seems to have been born around 1775 and worked as a sex worker in a floating brothel in Canton. She was known for her shrewd business sense (2). It was apparently this talent that made Cheng I seek her out (1). Cheng already had considerable forces under his command when he married Ching Shih, but together they were able to unify several smaller gangs into a fleet that ultimately was made up of 1,800 ships and as many as 80,000 men (2). For comparison, the famous pirate Blackbeard commanded only four ships and 300 men (1). For yet even more impressive comparison, this badass and her husband had more than twice as many men in their service as the Spanish Armada (2). Fucking wild.

Meanwhile her husband was apparently bi and wanted his lover/protégé to inherit his legacy so he adopted him which is less uncomfortable than it sounds to our modern, Western ears as it was the primary means of “establishing kinship” for inheritances (1). Women were limited in the rights they were granted (2) and I presume this was also true of inheritances.

In any case, Cheng I died unexpectedly, leaving his “son” Chang Pao to inherit the fleets. Almost immediately, Ching Shih took Chang Pao as her lover as well, soon marrying him (2). And thus she retained her power in the fleet with even her new husband subordinate to her.

To continue to maintain her position, she instituted a severe code of laws which included the following:

But it wasn’t all threats. She also provided for her crews by guaranteeing 20% of all captured goods for those doing the capturing (2). It’s almost like a union. Or something.

Y’all. This whole operation was so massive and so well-run that nobody could stop them. They were able to move their operations onto land and into cities, getting involved in the salt trade and eventually all but ceasing the opium trade (2). People do not like not getting their opium, it turns out.

Eventually the Chinese government realized that even with the help of the Portuguese navy and England’s East India Trading Company, they could not make a dent in Ching Shih’s forces. They offered a generalized amnesty to all the pirates if they’d just stop pirating (3).

So Ching Shih recognized the power she held here and, in theory, could have continued on as they were, but she also knew that tensions were rising among the leaders of the various fleets she commanded. She realized the power she held and the chance for this total amnesty would ultimately not last. She decided to negotiate the best terms she could for herself and her crews (2).

Y’all. This may be the most badass part of all of this. She did not budge during negotiations which went on over a couple of months and multiple attempts. Eventually she showed up at the home of the highest official in the land with only women and children to accompany her. She would not agree to any terms until it was guaranteed that her second husband Chang Pao would be allowed 80 ships to continue working in the salt trade, legitimately (2). Not only did none of her pirates receive punishment, but many went on to do the same work they were already doing, and many others went on to join the actual military (2). But really. Can you imagine?

As noted earlier, women were limited in various ways in how they could hold power. Ching Shih had achieved her status through illegitimate means thus far. Now that she and her crews were going straight, she wanted to maintain status. Normally remarried widows could not hold the title of Wife of an Official, but this badass bitch petitioned and won that right despite the social barriers (2). Absolute fucking queen, y’all.

She spent the remainder of her years in peace, running a gambling house, until her death in 1844.

So many women who achieve power in situations where it is typically withheld from them come from some sort of privilege, either an established family, or financial means, or a privileged community, or educational background. But Ching Shih seems to have had none of these. She rose from a brothel to become more powerful than China, Portugal, and England combined using only her wits and her shrewd business sense. I am in utter awe of this badass bitch.

in Badass Bitches From History, My Own Ramblings, News
0 comments… add one