The Fallacy of the BMI 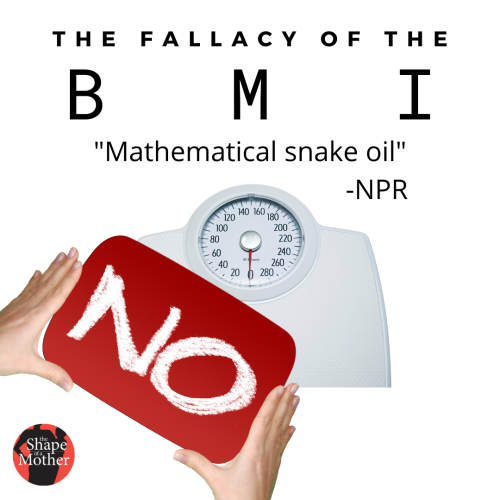 Every day our lives are shaped by this simple calculations. This may not be obvious to you if your calculations happen to land you in a socially acceptable place, approved of by authorities. But for many of us whose BMIs are outside of that window, we are denied healthcare, charged more for it, or punished otherwise. The whole story is much bigger than just the BMI and at some point I will get into fatphobia itself and its vast implications in the world. But for now let’s look at the BMI specifically because it is used ubiquitously in healthcare and not only is it inaccurate but it was never meant to be used for individuals.

This little article is just a quick fact sheet. For more complete information and history I suggest checking out the articles The Bizarre and Racist History of the BMI by Your Fat Friend (Aubrey Gordon), and The Racist and Problematic History of the Body Mass Index by Adele Jackson-Gibson.

But for a quick overview, here are some fast facts:

To get a more visual idea of what various BMIs look like on real people, you can check out my new Instagram project (you can submit your pics, too!). This project is based on Kate Harding’s BMI Project which this page has historically linked to. She’s given me her blessing to bring this new version to life to update it and hopefully continue spreading the word about the fallacy of the BMI.

Look, I know it’s nice to have a simple formula we can all agree on. But the fact is that it doesn’t work and the more we rely on it, the more we harm folx. I’ve been charged more for insurance because of my BMI. I’ve been denied medical care because of my BMI. People whose bodies are smaller than, or larger than the “healthy” range of the BMI are not allowed to donate their bodies to science (and then that means that doctors in training do not get to learn from fat bodies which perpetuates the cycle). Again, we will get into these details in a future post when we examine fatphobia, but it’s important to see ways in which BMI specifically limits people.

It’s way past time to throw the BMI in the garbage where it belongs.

And while we’re at it – throw out your scale, too.

in education
0 comments… add one