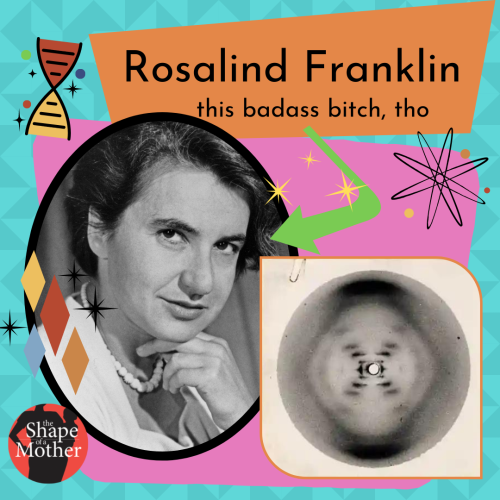 Y’all, this badass bitch, tho. Rosalind Franklin was a gifted and driven English scientist in the middle of the 20th Century. And because she was a woman, she faced a fucking lot of misogyny. Yay, Women’s History Month.

Watson and Crick are the men generally credited with the discovery of DNA, but there is huge debate even to this day as to whether they did, whether Rosalind Franklin did, or whether they stole her work and succeeded unethically. After doing my research, I feel like the answer is this: they absolutely profited off of her work without her knowledge or credit and anyone who says otherwise is, usually, a man.

Here’s how it went down.

Rosalind was an English chemist and X-Ray crystallographer and, after doing work on coal that was vitally important to WWII and to the world we live in today, she took a fellowship at King’s College in London where she wound up working on DNA structures. There was some miscommunication, or perhaps some chaotic reassignments within their department when she joined and this, in addition to apparent personality differences, caused some friction between herself and fellow researcher Maurice Wilkins (1). “Her friend Norma Sutherland recalled: ‘Her manner was brusque and at times confrontational – she aroused quite a lot of hostility among the people she talked to, and she seemed quite insensitive to this (1).'” Girl, SAME.

Meanwhile, at Cambridge, Francis Crick and James Watson were doing the same work, but struggling to find the correct answers. “Watson and Crick’s first foray into trying to crack the structure of DNA took place in 1952. It was a disaster. Their three-stranded, inside-out model was hopelessly wrong and was dismissed at a glance by Franklin (1).” Badass.

Meanwhile over at King’s College, Wilkins had been working with graduate student Raymond Gosling on attempting to get pictures of DNA with some success. But once Franklin arrived, she, working with Gosling, who had been transferred to her leadership, used her expertise in Chemistry to make some adjustments to the camera and tools Wilkins had been using. In this way she was able to capture the first clear picture of DNA. Photo 51 by Franklin and Gosling

Now there’s a lot of politics and bureaucratic nonsense going on here and it’s not unreasonable for Wilkins to have felt slighted with his tools and grad student being used to achieve superior work without his input or involvement. Based on everything else I’ve read on this case and also my experience as a woman in our society, I think it’s reasonable to say that the fact that the superior work was being done by a woman must have stung even more.

But what’s not reasonable – and what’s strangely up for debate to this day – is what he did next.

He fucking showed the photo to Watson. Without Rosalind’s permission.

This is particularly important because this photo changed the game. Immediately, Watson understood that he was looking at a double helix. He later said, “my mouth fell open and my pulse began to race (qtd in 1).”

Here’s where the “debate” comes in. Did he “steal” the photo? Technically, no, nothing illegal occurred. But was it unethical? FUCK YES, JESUS CHRIST, YES IT WAS UNETHICAL FOR FUCK’S SAKE. Matthew Cobb, at the Guardian, wrote that, “Their behaviour was cavalier, to say the least, but there is no evidence that it was driven by sexist disdain: [they] would have undoubtedly behaved the same way had the data been produced by Maurice Wilkins (1).” To which I, a woman, say, “mhrm, okay bro” but even if he’s right about that, I daresay we would not still be debating whether it was stolen work had it been stolen from a man.

But even this groundbreaking photo was not quite enough. More of Rosalind’s work was taken – again, not illegally, but not with permission or acknowledgement. Watson and Crick needed, not just the photo, but the detailed observations from it to make their calculations. This was made available to them by another man, Max Perutz, who showed them an informal report Rosalind had made (1).

Even Cobb admits that “The report was not confidential, and there is no question that the Cambridge duo acquired the data dishonestly. However, they did not tell anyone at King’s what they were doing, and they did not ask Franklin for permission to interpret her data (something she was particularly prickly about) (1).”

How the fuck can they claim that the work wasn’t stolen? A scientist and scholar of Franklin’s notes that “you do not hand unpublished data to a competitor. Period. I don’t care if the MRC report was not marked confidential (2).” And I mean, I’m just a lowly literature and Women’s Studies scholar, but it was made patently clear in every single class from middle school through university that plagiarism is unconscionable and this smacks of plagiarism. *shrug*

Furthermore, the arguments against wrongdoing by Watson and Crick (which tend to be made my men) generally go like this:

and my personal favorite:

What. Like. Really though. What? How is this an argument made by an adult professional? It feels like kids fighting on an elementary school playground. 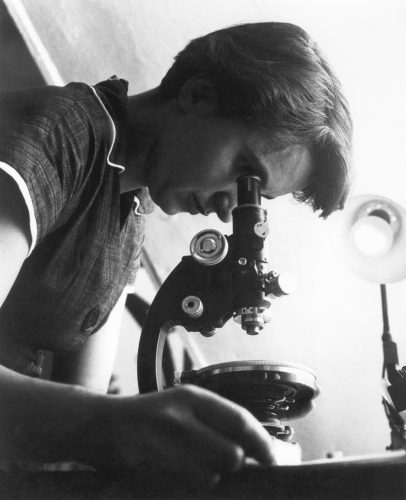 As for the information that was publicly available previously? Watson had attended a seminar in 1951 where Rosalind presented “virtually identical” data as was in the later-acquired report. “Had Watson bothered to take notes during her talk, instead of idly musing about her dress sense and her looks, he would have provided Crick with the vital numerical evidence 15 months before the breakthrough finally came (1).”

Yeah. Still not seeing how his refusal to take her seriously enough at the time makes it acceptable for him to use her work, retrieved illicitly, to earn a Nobel prize. I feel like any one of my professors would shrug and say “too bad, so sad” to me if I tried to use that as an argument. I certainly feel like, again, had she been a man presenting this information, Watson may have taken her seriously enough in the first place so that he would never have had to twist and bend ethics in an attempt to wash his conscience clean.

In an interview from PBS Newshour, Dr. Howard Markel, a medical historian was asked if Watson and Crick would have arrived at their world-changing discovery without Rosalind’s work. “They absolutely would not. It would have been very hard for them,” before conceding that “They might have, eventually (3).”

He goes on to acknowledge that “I think they never thought of Rosalind as a serious competitor of their level. I think it was chauvinism to the nth degree and was very common in academic science on both sides of the Atlantic Ocean at that time (3).”

That, friends, is how you ally.

Would they have, eventually, gotten there? Yes, maybe, but still not before our girl Rosalind. “The progress she made on her own, increasingly isolated and without the benefit of anyone to exchange ideas with, was simply remarkable (1).” She was speedrunning what had taken them years and stolen data to achieve. Markel notes, “Francis Crick said: Of course, Rosalind would have figured it out in a few weeks. It’s just that we figured it out faster (3).” (With stolen work.)

Rosalind lived only five more years, dying in 1958 of ovarian cancer, possibly due to her work with X-Ray technology, and four years before Watson and Crick were awarded the Nobel prize for “their” discovery. It is often argued that Rosalind would not have been eligible for the Nobel prize, anyway, because they did not award them posthumously. But to me that sounds like more bullshit because a) why they fuck not? and b) we will never truly know if she would have been considered for it.

Rosalind was an absolute powerhouse and her work changed the world not only through the vital understanding of DNA, or even her earlier work with the structures of coal, but because she worked with viruses as well and her work laid the foundations that shaped scientific response to the pandemic we are currently living through. Fucking hero. Badass bitch. Rosalind Franklin.

in Badass Bitches From History, My Own Ramblings, News
0 comments… add one