December 11 2010 marked an important date in my life: it was the day I stopped breastfeeding my two-year-old daughter Gabriella Michelle. I hadn’t deliberately planned to wean her on that very day. But I was unexpectedly put on an anti-seizure medication that the doctors told me was incompatible with breastfeeding. So I stopped nursing her right then and there.

It wasn’t much of an adjustment for Gabriella herself. She had been eating solid foods since the age of six months, and by the time I weaned her she was basically on a threemeal-a-day schedule. At that point I only nursed her before bedtimes and naptimes. She was using the breast more as a pacifier than a source of nourishment.

For me, though, the transition was more difficult. I must admit that in a way I felt “freer” once I had weaned her. No longer did I have to worry about wearing “lactation-friendly” (i.e. where I could easily expose a breast) nightgowns and pyjamas for the rare occasions she woke up at 1:00 a.m. demanding a midnight snack. The side effects of medicines that could pass through the milk, like aspirin and Tylenol, ceased to be a concern. Perhaps most importantly, a large weight seemed to have been lifted off my chest (pardon the pun!) at the thought that I need not be at her beck and call by providing milk for her whenever and wherever she wanted. While she had for the most part confined her “milk attacks” to just before she went to sleep, I still had to be on the alert for them in places like church, other people’s houses, and so on.

On a humorous note, I could now answer back to those people who had badgered me about never getting my daughter off the breast. A year earlier, for example, my brother asked me when I planned to stop nursing her. “I’m going to let her self-wean,” I replied confidently. “When she’s fourteen?” my brother remarked sarcastically. A (male) colleague teased me that in a few years I would be breastfeeding Gabriella through the schoolyard gate.

Yet with weaning came a certain sadness. I had enjoyed our breastfeeding relationship for over two and a half years. It hadn’t always been smooth sailing – I’d experienced everything from minor nuisances such as leaking milk (best remedy: breast pads) to potentially serious issues, like a foiled-at-the-last-minute bout of mastitis – but overall I hadn’t had any major problems. Breastfeeding, I believe, helped contribute to a special closeness with my little girl.

The sadness stemmed as well from the realization that I’ll in all probability never breastfeed again. My chances of having any more biological children are fairly remote, both for lack of interest and, at 41, of ability. And in the somewhat more likely scenario I adopted a child (adoptive mothers can breastfeed, though they usually have to supplement their milk with formula), I doubt I’d get a newborn, and the anti-seizure medication I’m taking would also present a barrier to nursing. So my breasts, like my reproductive organs, may be taking a well-deserved retirement.

Seeing my milk dwindle to almost nothing has also given rise to mixed feelings. Again, a certain sense of relief: once the milk supply completely dries up, I’ll be able to perform the breast self-examination my doctor has suggested I do regularly at my age. But the fact that my milk was once the sole source of food for my daughter and that it helped create such a close tie between us has triggered an instinctive urge in me to “hang on” to the few drops I still have.

But all in all, I must say that my memories of breastfeeding my daughter give me feelings not of nostalgia or sadness but happiness at the thought that I have crafted a wonderful relationship with her, a closeness that’s not going to go away just because I’m no longer nursing her. 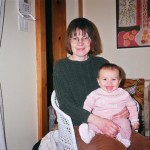 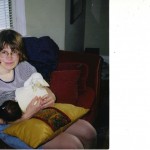