Trapped in a Vicious Cycle (Rachel)

Growing up I was always a skinny kid. I could eat the fattiest, greasy or sugar laden food in excessive quantities and not gain a pound. When puberty hit, I was blessed even more with the genes from my father’s side of the family, and grew big full breasts. Of course with puberty, comes a bit of weight gain and at 5’4″ and 105lbs at 14 years old, I looked healthy. Or so I thought. Some of the other girls called me fat and chubby, I’m guessing because they didn’t develop as much as I did. But that didn’t stop me from becoming self conscious and eventually developing an eating disorder.

Years later, I finished growing, left high school and met who is now my ex fiance. I was 5’7″ and 105lbs once again. The relationship I managed to get myself into was emotionally abusive. He’d call me a whale, should keep my clothes on, he could do so much better.. But since I was so used to the insults growing up, I didn’t think it was anything unusual. I yo yo’d between 105 and 95lbs. When I discovered I was pregnant 4 years into the relationship, I was 5ft7 and 104lbs.

I gained 54lbs during the pregnancy. I hated myself. I figured if I was fat at 105lbs then I must be morbidly obese at 159lbs. I delivered a 7lb 9oz girl in October 2006. My body hasn’t been the same.

I have stretch marks all over my bum, breasts, thighs and calves. My stomach is flabby and I can’t lose the last 10lbs no matter what I do. My once firm perky breasts are now deflated and sad looking. I have cellulite that just won’t leave.

I’m now married to a very loving man who thinks I’m beautiful and sexy. He has been trying for the last 3 years to build up my confidence, and it’s so strange to me to have someone that compliments me everyday. I can tell it bothers him when I disagree with his compliments, or he tries to touch my belly or bum and I push him away and get upset.

I thought after 5 years I would have at least accepted myself. Instead, I’m trapped in a vicious cycle of self loathing and depression. Maybe one day confidence will come back to me.

I have attached pictures of my belly and breasts at 5 years post partum. 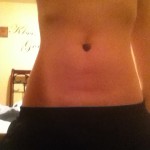 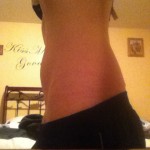 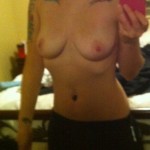 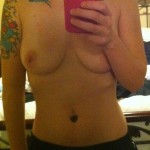