Skinny Moms, I have a Problem with You (Amanda)

Okay, let me get more specific here. Skinny moms that tell other women that you have a flat belly a month or two after giving birth to your second child because you have to chase child number 1 around. I have a problem with you. Big time.

Can you please just be honest with the rest of us, and admit that you have amazing genes? Because I don’t believe you. Not one bit.

This morning, I headed to my baby’s library class, and a mom with a two year old and a two month old came for the first time. Her stomach was flat. Like, this baby just appeared at the end of the marathon I ran and here we are flat. I asked how old the baby was not because of the moms stomach but because he was little and cute. When she answered “Two months,” the librarian who is probably in her 50s and has a slight mom belly despite being rather thin for her age and frame remarked, “Two months, and you look like that? That is ridiculously unfair.” The rest of us were thinking it as we awkwardly avoided glancing at each other’s or our own bellies. Then, the skinny mom flatly responded, “Oh, well, I chase her around so that’s what has me looking so good again.” And I had to hold my mouth not to scream. “BULL SHIT, I don’t believe you.” I mean, really, ladies, you know who you are. Chasing a two year old for two months is not what gives you washboard abs after baby number 2.

Why do women lie to each other? Is it purposeful or is it just that hard to accept you are one of the lucky ones? And you don’t count if it took you more than two months to get your body back.

I remember when I found out I was pregnant and woman after woman told me to pick up cocoa butter or vitamin E or olive oil or skinny butterfly juice (I made that one up) or whatever it was that they slathered on their belly while pregnant that caused them to come out the other end with no stretch marks. I remember reading article after article that said some things could make stretch marks worse like too rapid of weight gain, but if you are destined to get them, all the cocoa butter in the world won’t stop them. And I religiously rubbed Burt’s Bees Mama Bee cream all over my body. Even my toes. Just in case. And my husband would try to gently comment that it smelled gross, but I didn’t care. I watched the grease soak through my bra, my shirt, the pregnancy pants panel that covered my whole belly, and I sat there so optimistic that the more grease seeping through the less likely stretch marks were on their way.

I begged my OB at the time for a secret. I wouldn’t tell anyone, if she just told me how to not get stretch marks. She bluntly replied, “If there was a cream that prevented stretch marks, do you think I’d be here? I’d be somewhere else selling it.” And so, after months of wasting money and time, one day, my first stretch mark began to appear. I convinced myself that it took mine longer to appear than most women who had serious stretch marks appeared. But I lied. They came in, and while they aren’t as bad as some. They’re still here.

I remember heading to my midwife’s office five weeks postpartum, and I’d already lost 28 pounds just from breastfeeding, but my belly looked five months pregnant. She okayed me to start working out when my body felt okay, and she warned me that my abs had separated during pregnancy. So my back would start to hurt more and more if I didn’t start doing abs to try to bring the muscles back together. That was back when I was sleeping 3 hours total in a 24 hour period because my baby and I were having so much trouble breastfeeding.

I went home and tried to do a sit up, and I damn near died it hurt so much. Then, later, I tried to run on the treadmill, and I thought my lady parts were going to fall out.

So I didn’t run for a long time, and when I finally started moving again, I stuck to walking. I worked my way up to crunches with two 5-lb weights, and while my stomach is nowhere near flat, 9 months out, I don’t look quite as pregnant as I once did. Most days I proudly show my husband and son the almost abs I’m getting back. You know the ones you can see surrounded by my mom bulge? And I usually feel great about my body, but some days, I hide my stomach behind my backpack when I’m in a group of people so that people don’t look at my belly for too long.

~Age: 30
~Number of pregnancies and births: 1/1
~The age of your children, or how far postpartum you are: 9 months 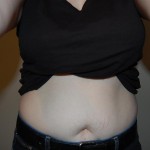 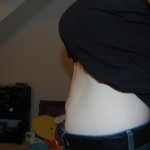 Previous post: So insecure about my body! Trying to accept it, but it’s not easy! (Anonymous)