My struggle, the stretch marks are totally worth it (Anonymous)

I have an incompetent cervix. This means that my cervix opens way too soon, resulting in a miscarriage or stillbirth. My first pregnancy I lost at 9 weeks when the baby was discovered to have passed away. My second pregnancy I lost at 4 months, when my water broke and I was dilating. The baby was already on her way out, so I had to deliver. At this point.. no diagnosis was made. They said it was a fluke, and no mention of a cervical condition was made.

When I found out I was pregnant again, needless to say, I was terrified. All I could think is “What if it happens again?”. I was very cautious, and so was my doctor. Every little pain I felt I made sure I was checked out. At around 18 weeks I was feeling some strange pressure, so being the nervous mama that I was, I went to the ER. The ER docs checked me out. They did a manual exam which concluded that my cervix was still closed. I was relieved. They decided to call my on call doc to let him know what was going on and then they were going to release me. I was sitting in the exam room waiting, quite relieved that everything appeared to be OK. Then, the on-call doc walked in. He just happened to be in the hospital, and given my history he decided to check me out himself. He did another exam and said that my cervix was closed but felt a little bit soft and not like that of a woman who has never given birth at term. He took me up to L&D. I started to get a little nervous but figured he was just being cautious. He did a transvaginal ultrasound and found that my cervix was serverely funneled (opening from the inside out) and very short. Usually this happens when you’re going into labor, but in my case.. it was just happening. I cried, got dizzy, almost passed out. The doctor was very kind and explained what could be done and that all hope was not lost. I decided to go home that night, and call my own doc in the morning. I truley believe that the on call doc being there was a miracle. If it wasn’t for him, I would have lost this baby too.

The next morning my doctor had called me. He had my report to a local women’s only hospital. The High Risk specialists there were awesome. They confirmed that my cervix was indeed dilating and short. They then set me up for an emergency cerclage. A cerclage is a stitch placed in the cervix to hold it closed and keep the baby in for as long as possible. They admitted for the night, and the procedure was set for the morning. I was TERRIFIED!! I barely slept all night long. I cried the whole time I was wating to go into surgery. There are risks to the procedure (breaking of the water, infection etc) and I just wanted to bad for my baby to be OK. Turned out, the procedure wasn’t so bad. I was awake for it, but was given a Spinal Anesthetic so I couldnt feel a thing. It was over in about 30 minutes.. and then I was sent to recovery. I had some cramping but was doing OK, so they sent me home that night.

At first, I was scared to even move out of my bed. I was taken out of work and was told to stay at home and relax for the most part. I wasn’t on bedrest persay but I was still terrified of doing anything to mess things up.

Ok, fast forward to now. Every since the placement of the cerclage my cervix has been being very good! The funneling has resolved and my cervix actually gained length. I am now 31 weeks, and the baby is doing great!! He kicks me all the time and I love it. Some days I sit here and watch my belly move all around.. It’s so cool :) No one had even expected me to make this far. But here I am.. still doing great. No signs of labor or anything. I am so thrilled.

What’s funny is that once things started to look up and I started to get a lot less nervous.. I started looking at the changes in my body. My belly really started to pop right out at around 28 weeks. I am short (5’2) and I am all belly it seems. I have only gained about 15-16 lbs during this pregnancy but I still have a lot of stretch marks. They are running all across my belly and sides. I was depressed about them for a while, but when I mentioned it to my boyfriend he just looked me funny. He said “Babe, all this time you’ve been so worried over this baby and now you’re worrying about something as superficial as those stretch marks? I’d love you if you were covered in them. Don’t worry so much!”. He was right. How could I worry about such a thing? They are my mommy marks. Proof of what I’ve overcome to make it this far with my little one. Don’t get me wrong.. I still constantly use creams and lotions on my belly.. but I am not depressed about it. I can worry about my body later. For now, I just want to get this baby into the world safe and sound. I worked so hard at this.. I refuse to let such a silly thing get to me. I have included some pictures of myself. The first one is pre pregnancy, I was about 125 pounds there. The second is me at 21 weeks, the third is at 25 weeks, and the last is at 30 weeks. Thanks for listening!!

Your Age: 24
~Number of pregnancies and births:3 pregnancies, currently 31 weeks 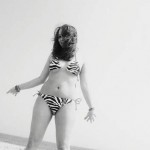 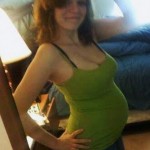 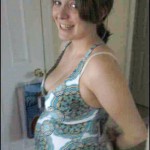 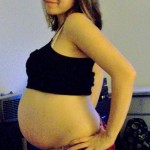 Next post: Is there hope or am I going to be in these shoes forever? (Emily)