It all started when I was 19 years old. I found out I was pregnant with our daughter sometime during the end of August 2005. I was around 140-145 before I got pregnant with her and gained 51 pounds during my pregnancy, she was 10 days early. It took me awhile to start to lose weight. My daughter was around 18 months old when I finally started to exercise, I don’t know why I didn’t start sooner. I manged to get back down to my pre pregnancy weight and also lost an extra 13-15 pounds on top of that, putting me around 125-127. I was really happy with were I was at weight wise and I felt wonderful. Mind you, my daughter was about 2-2.5 by this point so it took a little while. I basically just walked a lot, became a vegetarian and eat really healthy whole foods as much as possible. My husband and I decided it was time for another baby, it happened faster then we thought, 2 months after trying we got our positive test but I miscarried that baby at 6 weeks. In those 6 weeks I gained 5lbs. So I went up to about 130. I was determined to get pregnant again, the next cycle we got another positive. I was scared but excited. I felt better with this pregnancy, it felt different. I was able to eat a good diet and drank lots of water and continued to exercise. I really didn’t want to gain another 50 pounds. My pregnancy went really well! A lot easier then the 1st and 2nd. I only gained 37lbs. Putting me at 167ish. About a week after my son was born I had already dropped 20lbs. I honestly thought it would be easier this time but I was wrong. I exercised as much as a could with 2 kids. My daughter was only a 3 years 3 months when brother was born. She still needed a lot of my attention and I was still breastfeeding her. I tandem nursed for 3 months. Then she was done. So my son is now 16 months old and a little more independent, still breastfeeding. I managed to get down to 132 and was really happy about that, but my thyroid is acting up and I’m back up to 139-140. It seems that my waist line and other measurements are going up .5 inch as well. I’m going to see my midwife on Thursday to discuss some things. I have been exercising and eating well and gaining weight. Very discouraging! It all started to go downhill after my father passed away in November 2010. I just started to wear my pedometer yesterday and I will be trying to walk 10,000+ steps a day and see if that helps.
I have always been very self conscious, it is so hard. I love having children and watching my body grow, but hate having to fit for it back :) Our plan is for me to get back into shape and start trying for our next in a couple months if God is willing! 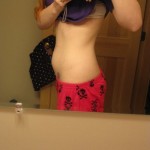 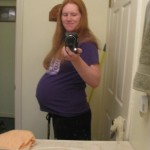 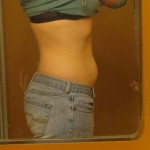 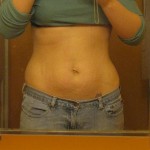