Mama of Three Under Five (Anonymous)

I have three kids under age five.
I enjoy this site and believe that all mothers are united by that bond of knowing what only a mother knows- that you helped create this life with your flesh and bone – nurtured and grew it, protected and fed it, thrilled in its movements and spent sleepness nights with worry over one who would eventually reveal him/herself as an amazing little boy or girl. All mothers’ bodies are beautiful for this reason alone.
My first child, a daughter, was born 8 pounds, 15 oz., born two days early (vaginal delivery but with pitocin and epidural)… I had a small tear that didn’t heal well and that coupled with trouble breastfeeding caused me so much angst and pain! If only someone had told me that it does pass, it is worth it, and it did, and it was. I had a linea negra mark on my belly and I hoped it would stay, but as you can see from my pictures it vanished. I thought it was a beautiful “mother’s mark.” I think my swimming-pool-sized belly button suffices for that though. ;)
My second child, also a daughter, was born 8 pounds, 6 oz., induced one day after my due date. Things went so much more smoothly after this one. Breastfeeding was easier in general because I knew things would get easier, which they did. At about 6 weeks I developed mastitis once (my only time getting it), but with some good antibiotics the pain and fever were gone in hours. I also developed late-onset post-partum anxiety around 9 months, but that went away a few months later with time, patience, and meds. Both pregnancies themselves were uneventful in a good way… I was pretty active and didn’t have any morning sickness to speak of.
My third child, a boy, was born 9 pounds 6 oz., induced one day before his estimated due date. Another awesome, easy delivery (thank you epi!) and breastfeeding and everything else was the easiest yet. I haven’t had trouble eventually losing the 50 to 60 pounds I gained with each pregnancy because of breastfeeding I guess, and also just being tall and predisposed to slenderness. I don’t eat terribly but I don’t diet, and I’m active but I never “work out.” Having three kids keeps you busy in general. Heck, having one busy kid does that!
I’m finding motherhood a joyous if incredibly stressful journey, riddled with peaks of happiness and valleys of fear and occasional despair, all just the typical patchwork of mothering emotions for us all. I feel like I was a successful enough person before having kids, but boy, the experience of raising these children is my greatest triumph, and it so far surpasses anything in my past that those great adventures pale in comparison. In this, we mothers are all united, and I think we are all in on some great and wondrous little secret. ;) 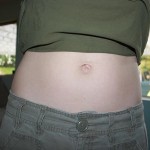 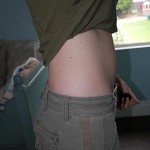