Healing Takes Time But I’m On My Way (F)

I finally am ready to share my story and photos. I have been reading other women’s stories on Shape of a Mother since I was 6 months pregnant or so. They really helped to change my views of my own and other women’s bodies. I now believe that every woman is beautiful. Being a mother is especially beautiful, to me.

I met Michael in July of 2008 and even with our 16-year age difference (I’m 23 now), we fell in love and decided to have a baby. I discovered I was pregnant in November 2008. My pregnancy was healthy, though I was very morning sick for a few months and I also gained about 90 pounds . I was very skinny when I met Michael and by the time I got pregnant I had gained about 20 pounds and was at a perfect weight (160 lbs- I am 5’10”).

Pregnancy brought out a lot of emotional issues, some I didn’t even realize I had. I learned a lot about myself, but unfortunately I had some pretty extreme arguments and fights with my close friends and my mother. Michael and I also began arguing a lot. Luckily my friends and mom eventually understood and forgave me, but over time the fighting really started to disturb Michael, who was (and is, I believe) struggling with his own inner problems of depression and anxiety. I kept promising him that it would get better once I had the baby.

Sophia was born in August 2009, at which time Michael and I were getting ready to buy a home for our family (we had talked about marriage but at that point we definitely felt we should take it one step at a time). My water broke one evening after I woke up from a nap, and 8 hours later, my daughter was born. I had an epidural at 9 cm (we didn’t know how far I was until after I got it!), and there were no complications. It was the best and scariest day of my life. I now know what it is like to fall in love with someone you KNOW you will always love! Giving birth really does help you to learn how to work with your body, and if I ever have another one, I would like to try and skip the epidural all together.

So, Michael took 7 weeks of his paid vacation time to be with me and the baby. It was great, but tiring and stressful. We still continued to argue over the tiniest things. I had to learn to let him do things his way with the baby (leave the room if you have to, I figured out! Haha). In October, Michael dropped a bomb on me: He wanted me to move out, and he was canceling the house deal.

I was shocked, hurt, angry, and in denial. I talked to friends and family (whom I love dearly but are not the type of friends or family that I could just go and stay with…) and I decided to stand my ground and say, “I’m not moving out yet. I’m only 8 weeks postpartum!” Sophia and I moved into her nursery and we continued our breastfeeding relationship. Things began to get extremely tense with Michael. One day we discussed how things would be as far as him seeing our daughter when we moved out. We ended up arguing because he thought he should have her some nights out of the week since he had been getting up with her for one night-time feeding (she had, and still has, 3 per night). I disagreed, because I knew it would compromise our breastfeeding arrangement, and I was not prepared to let her sleep somewhere without me at such a young age.

Eventually Michael filed for a PFA (Protection from Abuse) with the court due to “verbal abuse.” The PFA also included an eviction which is what he was after. He just wanted me out, immediately. I had been resisting moving out because I had not worked since I was 5 months pregnant and he had been supporting me. He was my only source of income. I was also really nervous to live alone again, and even more nervous to live alone with Sophia. After a lot of anxiety, crying, feeling sorry for myself, and praying, I agreed to move out if he paid for the move and if he agreed to pay monthly child support. I am a part time student and when I start school again this semester I will also have student loans to live off of. So financially I WILL be taken care of, I just need to learn to budget.

So now Sophia and I live one block away from her father (that’s right, I moved into an apartment building one block away). He has her 3 hours a day. It’s not a lot of time but it’s better than none! He will also be watching her when I take my classes at school. Though as of yet, we are not friends (tried that and it didn’t really work….he doesn’t want me to come into his apartment because he needs his space, and although it seems extreme, I can understand it, sort of.) I am hoping that one day we will be able to get along as friends do. We do still communicate about our daughter and we both love her very much. She’s healthy, and happy, and adorable! I have a therapy session once a week and am learning ways to cope as a single mother. I am sloooowly losing the weight and though I haven’t been exercising much since I moved out, I plan to start again. I am still breastfeeding as well. I really love it and Sophia really loves it, so I want to do it as long as I can!

Sharing my story with all of you is part of my healing process. I could keep analyzing the “whys” of the situation, and keep thinking of all the things I did wrong and could have changed, but that is not what I am supposed to do. I am supposed to be a good mother to Sophia, and that is what I plan to be. Although things did not turn out the way I had hoped, imagined, planned for, and wanted so desperately, they turned out the way they were supposed to, and the best part is- it’s not over- I have a whole life to keep living with my daughter, and I am in charge of my destiny!

Thank you for reading this.

PS. I could have easily gotten Postpartum Depression (and still could!), but I have been on the lookout for it. I have added fish oil capsules to my supplement routine and they have really helped my mental and physical health! 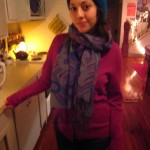