I stopped taking my birth control pills at the end of May 2010. I found out I was pregnant on July 17th, 2010. I would say my pregnancy was normal. There weren’t any complications. I gained a total of 45lbs. I was 185lbs at my first prenatal appointment. And 230lbs at my last prenatal appointment. At 36 weeks my doctor told me that my baby was measuring a little big. An ultrasound estimated that baby was 8lbs 12oz. My due date came and went. I was scheduled to be induced on a Monday April 4th. I went into labor at 8:30pm on Thursday March 31st. I was 40 weeks and 4 days pregnant. My contractions started at 5 minutes apart. By the time I got to the hospital at midnight they were 2 minutes apart. I was checked and only dilated to 3 and a half centimeters… I walked around the hospital for 3 hours until the contractions became unbearable. I was checked again and was at 5 cm. I was taken to my room and given my epidural shortly after. I was checked again and had dilated to 7 cm. So far so good right? The doctor broke my water to try to speed things up. Hours later I was still at 7 cm so I was given pitocin. I was contracting so much at one point they had to turn my pitocin off. I never dilated past 7 cm. My babys heart rate was high and I had a fever. My only concern during my entire pregnancy was that I would have to have a c-section… And that’s exactly what had to happened. I was distraught. I cried for about an hour while they got everything ready. I didn’t want the pain and the longer recovery time and even more I didn’t want the scar and the “lip” that my sister has from her c-sections. The moment I heard my baby cry I forgot about everything else. Chanel Marie was born Friday April 1st, 2011 at 3:39pm. She was 8lbs 8oz of pure perfection. I recovered quickly from my c-section. I was up and moving at the hospital. I took it easy but I didn’t baby myself. I lost 30 pounds in the first 2 weeks after delivering. Since then I’ve been losing about 3 pounds a week. I have 8lbs to lose until I’m back at the weight I was at my first prenatal appointment. I’m breastfeeding and eating a healthy diet and I’ve been going on walks about twice a week. I’m hoping to be cleared by my doctor to start working out at my 6 weeks pp appointment which is this Friday. My final goal weight is between 140 and 145. I’m going to give myself a year to meet that goal. And I’m hoping by the time I reach my goal weight my “lip” won’t really be noticeable. It’s already looking better since my tummy is getting flatter. In the end everything I was worried about hasn’t been as bad as I thought it would be. Besides it was all for Chanel so it was more then worth it. I’m sooo in love. I’d do absolutely ANYTHING for my babygirl.

Thank you SOAM for letting me share. I owe a lot of being able to accept my body after the pregnancy to the site and women who have posted their stories. I hope that someone will read my story and it will help them to accept their body after their pregnancy as well. There is nothing more beautiful then life and love. And that is what our bodies have done. Created life and love. 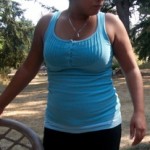 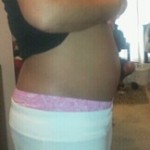 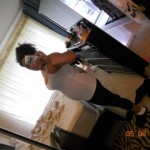 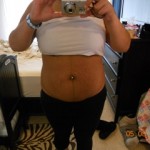 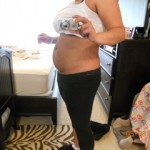 Next post: What I feel on the inside doesn’t match the outside… (Anonymous)