so when i first thought i was pregnant i was 218 lbs, i took two hpt’s and both negative and later went to the doctor and got negative so i got a sono and im five and half months i weigh 224 lbs now, i never really had any symptoms that were that apparent, my tummy is not hard and only really sticks out a little around my belly button but its just like a normal very chubby belly and i dont get it so im posting a picture in hope of some opinions 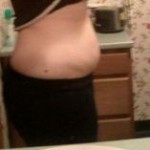