I had my first four babies in the hospital with varying degrees of intervention. I was fortunate to avoid a c-section, even though I begged for one when the contractions were right on top of each other and hard to deal with. In between my babies I had numerous miscarriages. In 2009 I got pregnant with my fifth baby, completely unexpectedly. I decided that since I couldn’t plan my pregnancy, I was going to plan my birth … so I hired a midwife and had a homebirth.

I had my son on October 27, 2009. He was 8 days overdue and weighed 10lb 6oz. He was born after a literally painless 30 minute labor. If I had known how much better homebirth would be, I wouldn’t have waited so long to have one!

I weighed 225 pounds when my son was born. I lost most of the weight quickly (after all, the majority of it was him!) But then I was stuck at 205 for a long time. I started exercising and changing my eating habits in June 2010 and have lost 30 pounds. I weigh 175 and am 5’4″ tall. I still need to lose 25 pounds to be a healthy weight, but I feel like a goddess where I’m at. Part of me would love to have a tummy tuck but at the same time I feel like the stretch marks are almost a badge of honor, proof of what my body has done.

This might seem silly but the only part of my body that really truly bugs me is my upper arms. I feel like they are inordinately large for my frame. But I am working on them, slowly but surely. Hopefully they will be toned and pretty for the summer …. but if not, there’s always next summer. 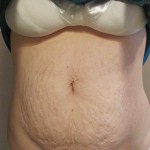 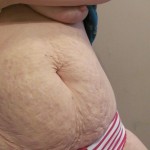 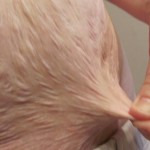 Next post: My Fiancee Loves My Womanly Body – Update (Anonymous)