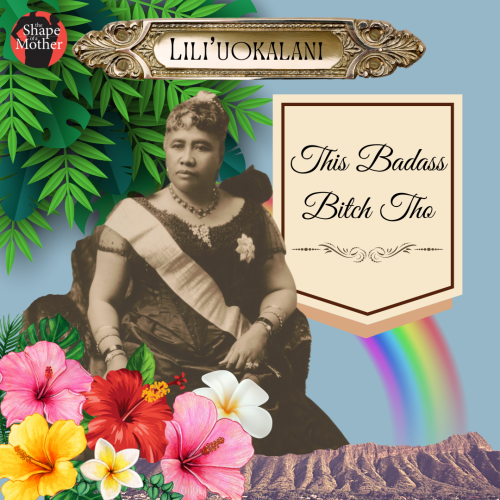 Born Lydia Lili’u Loloku Walania Wewehi Kamaka’eha in 1838 (1), the future Queen of Hawai’i was adopted at birth to another high-ranking family per traditional Hawai’ian practices. This badass had ties to Hawai’ian royalty on both sides of her family: her birth mother was an advisor to King Kamehameha III, and her adoptive mother was a granddaughter of King Kamehameha the Great (3), the man who united the Hawai’ian Islands and all the chiefdoms within so as to be a stronger force against the forces of the colonizers (6). The practice of hanai, or this type of adoption, was frowned upon by colonizers at the time who “[compared] the practice to doling out puppies” and because of that, fewer Hawai’ians today keep the practice up (4). But there is a faction working to bring hanai back, noting that it was not, and should not be seen as “’giving away,’ but rather as ‘sharing. ‘The family didn’t get smaller, it expanded (4).”

Lili’uokalani was baptized Christian at birth. Twenty years before she was born, a group of congregationalist missionaries settled in Hawai’i and set to work converting the Indigenous population to Christianity. By the time the future Queen was born, a third of Hawai’ians had converted (5).

Lili’uokalani wrote of the formal end of Hawai’ian religion in her memoir:

“…my great-grandaunt was the celebrated Queen Kapiolani, one of the first converts to Christianity. She plucked the sacred berries from the borders of the volcano, descended to the boiling lava, and there, while singing Christian hymns, threw them into the lake of fire. This was the act which broke forever the power of Pele, the fire-goddess, over the hearts of her people (3).”

Growing up, the future Queen was educated at a school built specifically for the children who held claims to the throne. She considered herself a good student, noting in her memoirs, “I was a studious girl; and the acquisition of knowledge has been a passion with me during my whole life, one which has not lost its charm to the present day (3).” The school was modeled after European or American schools; in fact the missionaries ran the school, with philosophies and beliefs of those other cultures being taught to the children who would one day run the Kingdom of Hawai’i. This may seem like a problem to our modern, “woke” minds – and I do not in any way intend to minimize the effects of this kind of colonization – but it was done with a purpose. Per PBS, “Hawai’ian chiefs could now see that their future lay with the world beyond the islands (5).” They believed the future monarchs would need a native understanding of other cultural beliefs and this would help to accomplish that. 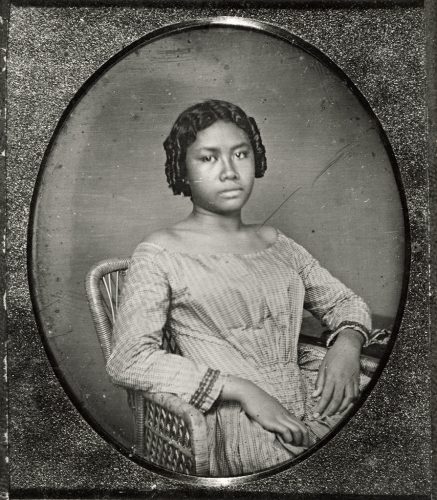 As a young adult, Lili’uokalani married John Owen Dominis, an American man born in New York, but raised, for the most part, in Hawai’i. Europeans and, especially, Americans were becoming increasingly important in the government of Hawai’i. Since the Kingdom had become a constitutional monarchy, in the style of European monarchies, the Chiefs, who had been trained and raised in traditional governments were considered unable to serve as part of the Monarch’s cabinet. Missionaries were installed in their place (5).

In reading her memoirs, it is clear that she was a classy lady who believed in remaining calm and polite, even as she was strong and powerful as a person and a leader. But she was very careful to always appear socially ladylike. (TBH I’m having a hard time calling her a Badass Bitch b/c I can feel her discomfort with the abject and I don’t know whether she would have understood embracing and reclaiming oppressions to strengthen ourselves haha) So while she spoke carefully and politely of her husband in her own memoirs, Lili’uokalani suffered loneliness in her marriage and struggled to be accepted by her mother-in-law who was not a fan of having indigenous folx in her family (5).

Unable to have children, Lili’uokalani threw herself into music, stating that “To compose was as natural to me as to breathe (3).” She estimated that her compositions must number in the hundreds and, in fact, she is known today as one of the most prolific composers of Hawai’ian music, beautifully intertwining traditional Hawai’ian chants with modern European style music. You probably know Aloha Oe. The song, about saying farewell, was inspired when she saw two lovers kissing goodbye, but later it would hold a deeper meaning for the people of Hawai’i. After their sovereignty was stolen from them, it felt to many like a song that represented the farewell to their beloved Queen and previous way of life. 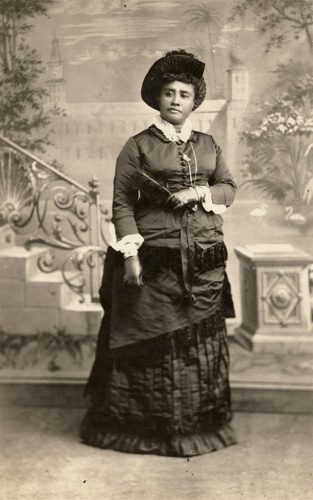 I need to take a quick moment here to relay a message I’ve been seeing from Native Hawai’ians recently. Colonization has taken so much from the indigenous peoples of the world, including Hawai’ians. Currently tourism is devastating the islands and Natives ask that you choose not to vacation there. My family has history there (not indigenous, the US military led my family there) and I had always hoped someday to show my children and perhaps to lay my mom’s ashes to rest there. But there are things more important than my personal desires so I will choose to listen to Hawai’ians and support them. I urge you to do the same. You can read more about this issue here. (And, yes, currently much of their income is based in tourism, but humans are creative and intelligent creatures and I am certain that they can find solutions to any problem that arises as they seek their sovereignty.)

Before I get to the tragic ending of a nation, I want to share a part of Lili’uokalani’s story that feels pertinent right now, during a global pandemic. Before she was Queen, but after she was named heir apparent to the throne, she served as Queen Regent while the King, her brother David Kalakaua, was overseas traveling and doing King Stuff. During this time, there was an outbreak of smallpox in Honolulu. Hawai’i had lost as much as 84% of it’s native population to smallpox, measles, and other diseases (6). So Lili’uokalani was not fucking around with this. She imposed a quarantine and effectively saved an untold many lives.

“A strict quarantine of all persons infected or under suspicion was maintained; and so scrupulously and energetically were these regulations enforced, that when they were relaxed and quarantine raised, it was found that no case had been reported outside the place of its first appearance. But it was a serious thing to confine its ravages to the city of Honolulu, in which there were some eight hundred cases and about three hundred deaths (3).” 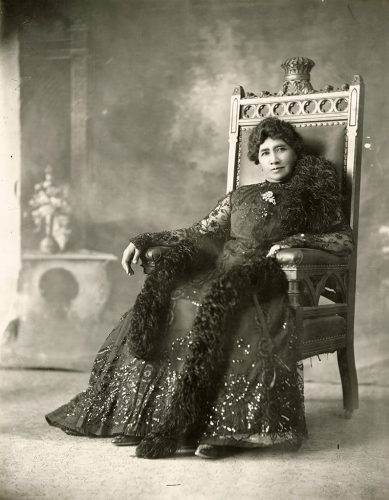 And heroine to her people, she always was and always will be. Because in the late 1800s, after the death of her brother King Kalakaua, she ascended to the throne only to have it stolen from her by a bunch of white dudes. She did what she could, but white men wield their power and take whatever they want in the world. And in this case, they wanted Hawai’i.

But let me back up a bit.

We’ve already seen how the Native Hawai’ians’ influence over government was weakened by Colonization: installing white Christian missionaries in place of the chiefs, for instance. There are many other facets to this, of course, including disease. In 1887, a group of American men who owned plantations on Hawai’i, led by Sanford Dole (yes, the pineapple Dole) among others, “took advantage of a spending scandal involving King Kalakaua” and forced him to sign a new constitution at literal gunpoint (6). This, for obvious reasons, became known as The Bayonet Constitution and it effectively stripped the Hawai’ian monarchy of nearly all its power, allowing foreign residents to vote and restricting voting to those who had significant income and/or owned land. Nearly 75% of native Hawai’ians no longer had any say in their own nation (6).

Shortly after, in 1890, the United States lifted tariffs on sugar, meaning that other places suddenly had the same access to American markets as Hawai’i. This lowered the price of sugar dramatically and created a hardship for Hawai’i which, due to colonization, had become economically dependent upon sugar (6). 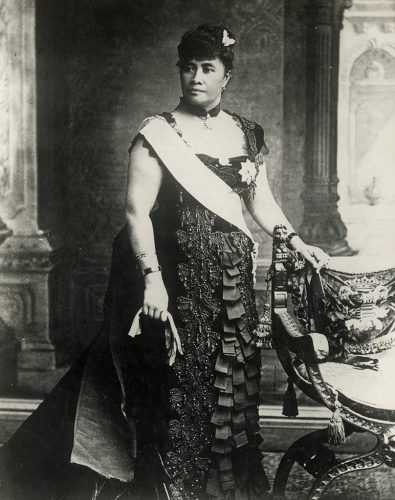 Then, in 1891, King Kalakaua died and Lili’uokalani stepped into her role as Queen of Hawai’i. Two years after that, she attempted to right the wrong of the Bayonet Constitution by creating a new document that would guarantee voting rights to Native Hawai’ians and restrict foreigners’ right to vote (6). The American businessmen were not into it. Fucking white people, amirite? So they did what powerful white men do to this day: whatever they can to get whatever they want and fuck everyone else.

A group of armed men, backed up by the United States Marines waiting in the harbor, marched upon Iolani Palace and demanded the Queen abdicate. Knowing she was outgunned, and wanting to protect her people, she ordered her guard to stand down, “and the coup leaders declared the monarchy abolished, established martial law, and hoisted the American flag over the palace (6).” Sanford Dole was named leader of this provisional government. United States President Harrison supported this and signed an annexation treaty in 1893. However, when Grover Cleveland was reelected president directly after Harrison, he attempted, sorta, to fix this. He called the coup a “serious embarrassment” and insisted that the monarchy be reinstated. However, when Dole refused to step down, the United States took no more action (6).

(I mean, if this isn’t giving echoes of Trump, idk what to tell you. History tells us we must NOT allow capitalist bullies to get away with their bullshit.) 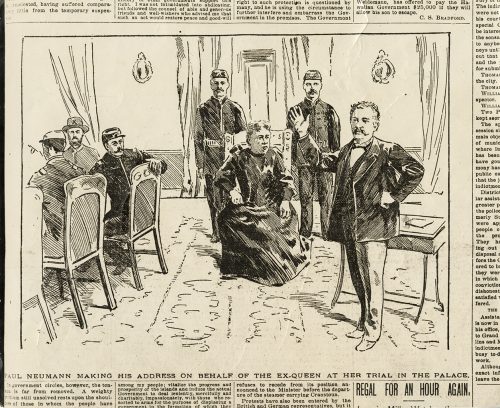 Native Hawai’ians attempted to get control of the monarchy back, but their forces were too few and too disorganized and they were arrested and threatened with death. Lili’uokalani claimed she was not involved with that attempted revolution, but to spare the lives of her supporters, she officially abdicated and the monarchy was thus ended.

Queen Lili’uokalani was imprisoned in one room in Iolani Palace for eight months as her punishment. President Cleveland pardoned her in 1896.

“It was the intention of the officers of the government to humiliate me by imprisoning me, but my spirit rose above that. I was a martyr to the cause of my people, and was proud of it (3).”

“Today only about 10 percent of the islanders are of Native Hawaiian descent. Native Hawaiians face a number of health and social disparities, such as lower educational attainment, higher unemployment, and poverty, and higher rates of tuberculosis, smoking, and obesity compared to their white counterparts (6).” 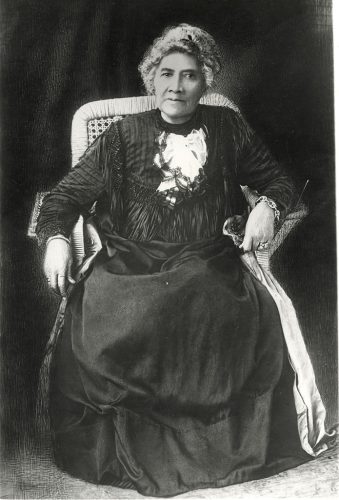 Lili’uokalani spent the rest of her life working towards the good of her people. She worked towards many causes that would protect her people and the land of Hawai’i, creating a natural preserve and programs for Hawai’ian children. Never once did she not put her people first during her life and today she is deeply beloved by her people, even more than 100 years after her death.

There is a lot to learn from this Badass Bitch: grace and power, love and righteous fury, knowledge and compassion. Her life was a strange mixture of colonial and traditional beliefs, social structure, art, and attitude. There may be much for Native Hawai’ians to discuss in terms of how much colonization shaped her, but that is not for me, a white person and therefore a member of the oppressive class, to consider. What I see in Queen Lili’uokalani is pride in who she was, in her people, and in her history. And I admire her wholeheartedly.