~Age: 20
~Number of pregnancies and births: two pregnancies. One still birth at 22 weeks pregnant. One live birth.
~The age of your children, or how far postpartum you are: son Jacob is 15months old. So 15 months pp.

I have always wanted to be a mother. Not necessarily get pregnant at a young age I always knew I would be a good mother.. When the time came. I was dating a guy I prefer to remain nameless but for this story let’s call him joe. Joe and I were not together for very long. Just long enough for me to realize he was a loser who dropped out of high school. Didnt care about getting a job and really wasn’t going anywhere in life. So I left him. No big deal. A few weeks later I took a pregnancy test and to my horror I was pregnant. Pregnant and alone. I managed the courage to call him and tell him we needed to meet up and talk. When i told him the news he said “well I hope u get an abortion, or else prepare to be a single mother” those were exact words I can’t force myself to forget. So I then found the courage to tell my parents. They were nothing but understanding, my mom told me “what’s done is done, and now we just need topray and take it day by day”. I’m so glad I have such an amazing family.

So the days went by and I spent a lot of my time crying and wondering how I was going to do this. I looked into options. Abortion was never an option, not for me. And I couldn’t figure out how I could carry a baby for nine months and then give it up for adoption. So my decision was made. I was going to keep the baby and do the best I could. Over the next few weeks I met a guy I really liked. His name is nick, But telling him I was pregnant is not something that was on the top of my to do list. But eventually I did, I told him over the phone. Immediately after I told him, he had to get off the phone. I figured “great” I scared away the only man willing to spend time with me. A few days later he sent me a text asking if he could take me out to dinner and talk to me. Of course I agreed. He told me that he didn’t care that I was pregnant and wasn’t going anywhere. Over the next few months he became very active in my pregnancy. He went to doctor appointments, ultrasounds, and even birthing class’s. On my birthday he told me that he loved me more than anything in the world and wanted to marry me and raise this baby as his own. I didn’t know what to say. He made me so happy I couldn’t say no. Every night we would lay in bed and hen would rub my belly and sing to the baby and read him books. Before we fell asleep he would get his face right up to my belly button and whisper “I can’t wait to meet you, daddy loves you son”. Not long after I was 2 weeks overdue and scheduling a c section. On august 12th 2009 my son Jacob Dean was born at 9 pounds 6 ounces. Nick cried and said “my son is so beautiful”. Jacob had some health issues and was in an incubator for a few days and had an iv. Nick never left my side once. He ate in the hospital cafeteria and showered in my rooms bathroom. Every time Jacob cried it was his duty to change diapers since I could barely move due to the c section. Nick is an only child with no cousins. Jacob was the first baby he had ever held. But he did an amazing job. He never complained about anything and was just so great with the baby.

Then it was time to go home, and all of a sudden all the confidence I had…was gone. I didn’t have a nurse to help me when I didn’t know what to do. We were on our own. My head was filled with “what if’s”. I didn’t know how I would take care of this tiny life. Every time I looked in the mirror I was disgusted by what I saw. I saw this ugly stretch marked skin and flabby fat that hung over the top of my jeans. I didn’t fit into any of my clothes and I felt like a whale. Nick always told me how beautiful I was and that now my body is beautiful in a new way. I carried and brought a life into the world. He said I should feel proud. But whenever I would breastfeed I would sit in our room and cry, and sometimes I didn’t even know why I was crying. I had a beautiful son and an amazing boyfriend but I was so unhappy with how I looked that I looked over all that. And reality also set in that I couldn’t go back to work and we didn’t know how we were going to pay for all the things he needed. I thought for sure nick would leave when he saw what actually went into being a parent. But he didn’t, he never left our side.

Now our son is one and a half. He is a happy boy who still has a great number of health issues. We live with my inlaws but soon will have to leave since we can’t afford the rent. We haven’t paid them rent in over six months. I am back in school and actually about to graduate and get my liscence as an Esthetician. Nick is still by my side and Jacob loves him more than anything in the world. Inside I sometimes still get sad that Jacobs biological father doesn’t care about him. He is not a good guy and would not have made a good father but it still hurts me that he doesn’t care. He doesn’t care that he has a son and he has never wanted to see him, I don’t know why this bothers me, am I wrong for feeling this way? I don’t understand it and it confuses me. I wonder why Jacob and I weren’t good enough for him and his family. When Jacob grows up I have no idea what I’ll tell him. He knows nick is his dad. Anyone can make a baby. But a parent is a nurturer. A role model. And a provider. Nick is the one who gets up with him in the night, feeds him in the day, plays with him at the park, picks when up when he falls down and gives him praise when he does something good. I feel sad that his biological father will never know what am amazing child Jacob is. And I think I’m wrong to feel that way.

I know my life is not that interesting and thank you to anyone who read this far. I guess I just needed to vent, tell someone my story. I always am at home and crave adult interaction. I’m scared because my son is almost out of diapers and I know I can’t afford to buy him more. Sometimes I wonder if I’m the only one who has these feelings. Are there other women out there who can relate? Who have input? I am eternally grateful to my boyfriend. He dropped everything he used to love for Jacob and me. He always tells me he wouldn’t change his decision for the world. He wants to try again for another baby. He loves being a father and he is great at it. My family loves him and they love that he is taking part in raising Jacob. They are grateful he came into our lives as well. Some people tell me I’m wrong for letting a man who isn’t the biological father raise him. I don’t get why that’s wrong. He loves Jacob. That’s what matters. Right? This site has made me see how real women are and how real our feelings are. We aren’t like the women in magazines. We aren’t back to a size two a week after birth. Thank you to everyone who writes thier stories on here. It made me not afraid to speak out about my story and my life. I just wanted to feel important and tell my story. To someone who will care about it.

Picture 1: nick and baby Jacob. I wasn’t out of surgery yet.
Picture 2: my mom holding baby Jacob. My first look at him right after my c section.
Picture 3: Jacob in his daddy’s arms. 2 weeks old.
Picture 4: nick and Jacob. One year old.
Picture 5: me and Jacob
Picture 6: Jacob now at 1 and a half. 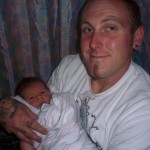 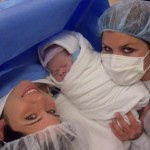 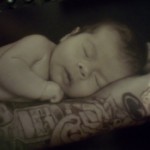 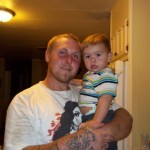 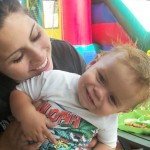 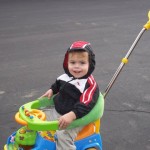