Adjusting to the Changes (mommy2m)

My husband and I have been together since I was 13 and he was 15. We moved in with each other when I was 17 and planned to get married sometime within the next year. A few months after I turned 18, I experienced some burning while I peed and figured I had a UTI. The burning got worse and I started to feel a cramping sensation and I got concerned that it may have become a bladder infection. My husband (at the time he was my boyfriend,) took me to the emergency room where they took a urine sample and gave me a room to wait in. When the doctor came back, she asked me if there was any way I could be pregnant, and of course I was shocked and said no. She took a blood sample to confirm the urine result, and it came back positive. I was so shocked and scared that i immediately left the hospital against medical advice (she wanted to do an ultrasound.) The next day I got my antibiotics for the UTI and started doing a lot of thinking. We decided that we wanted this baby, despite how hard it might be to maintain going to college (which I started when I was 16,) raising the baby, etc. In June I had my first appointment with an OB and got to hear my son’s heartbeat for the first time. I found out I would be due to give birth on January 15th, 2012. When I was 28 weeks, I decided I wanted a natural birth at a birth center with a midwife. I found a wonderful midwife who was 100 times what my OB ever was. She was amazing!!

My water broke on January 11th, 2012. My labor did not start on its own so my midwife began natural induction methods. I did two rounds of castor oil, lots of breast pumping, walking, homeopathics, accupuncture, blue and black cohosh, several other labor tinctures, pineapple, accupressure… We literally tried everything possible and none of it started labor. On January 12th around 5 pm, we had to discuss transfer to a hospital for induction. She had given me more than the 24 hours they are supposed to allow for labor to start, and nothing had happened. I was 5 cm and 90% effaced, but I had been like this for about 2 days with no sign of active labor starting. I arrived at the hospital around 6:00 pm and at 7:30 pm, they started the Pitocin. My midwife, husband, mother and a very close cousin of mine all remained with me and supported me through my labor. I went 6 hours on Pitocin without the epidural using the hypnobirthing method, but when they upped the dose for the third time, I couldn’t tolerate the pain any longer. The contractions were coming at about 30 seconds apart and lasting over a minute long, and the back labor pain never went away. I thought I had to have reached transition and had the nurse check me. After 6 hours of Pitocin, I had not dilated at all, I was still at 5 cm and my cervix hadn’t thinned anymore. I was SO disappointed and the contractions just kept getting worse til I was pretty much just screaming non-stop. The birth ball no longer helped me, hip squeezes weren’t easing the pain, nothing was helping. My midwife suggested that I get the epidural saying that maybe my inability to relax was causing me not to dilate. After about 30 minutes of consideration, I did decide to get the epidural. The nurse checked me about 10 minutes after I received the epidural and I had dilated 2 cm already. After that I was able to relax and get some rest and they continued to up the dose of Pitocin (which my son was handling extremely well. His heart rate remained steady the entire time.) Around 5:45 am I called the nurse in and told her I felt the urge to push and was feeling a lot of pressure in my vaginal area. My son was starting to descend. She didn’t want me to start pushing yet because the OB was not there (another patient of his at the same hospital was delivering her baby when I wanted to start pushing,) but I pretty much told her I was going to push with or without her. She stayed with me and at 6 am after having the epidural stopped, I started pushing. Pushing was the most physical effort I have ever put into anything. When my son started crowning all I could think of was the incredible pain I was feeling. The nurse was doing perineal massage the entire time I was pushing, which really was super uncomfortable and somewhat painful. However, I really feel she stopped me from getting external tearing. My husband, mom, and cousin (my midwife had to go home around 4 am because of issues with her daughter,) all supported me so much through my whole labor but especially during pushing. All of their encouragement really helped me stay strong and push with all my might despite the discomfort and exhaustion I felt. The OB arrived when my son’s head was halfway out. My son was coming out in a twisted posterior position and with his hand by his hand so the OB acted quickly and twisted my son’s body into the proper position which helped me bring my son into the world within the next 30 seconds. As soon as my son came out, he was placed on my chest while the OB checked me for tearing and monitored my bleeding and placental delivery. All I could think about was how perfect my little boy is and how happy I was to finally have him here! The OB did find 2 2nd degree internal tears, which he quickly stitched up (I only need one stitch for each tear.) I am so excited to have my son!!!!!

However, I’m not sure how I feel about my body. I gained 43 pounds with pregnancy and have lost about 20.I have minimal stretch marks that seem like they’d be pretty hard to see with a little bit of tanning. But my stomach feels like a deflated balloon and my thighs feel like jelly. I like my breasts. They’ve always been big and perky, and now they’re just bigger, which I don’t mind haha. But I can’t get over my stomach and the weird linea nigra i got which sort of curves around my bellybutton (which I’m hoping will go away,) and the ugly scar I have from the bellybutton piercing I had until I was 5 months pregnant. I feel like there is no way my husband could still find me sexy, even though he tells me that he thinks I’m even sexier now. I guess I should believe him because he hasn’t changed his sexual tendencies (he’s always been really um sexually amped up lol, he has a serious libido,) but I guess I just can’t see what he finds sexy and it’s upsetting to me. I plan to start working out today, starting with just some light yoga and a long walk with the baby (if he’s happy,) and up the intensity in the coming days and weeks. Hopefully i’ll be back here soon with more confidence! 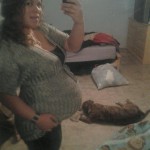 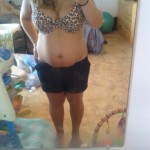 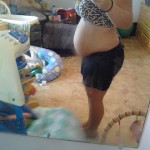 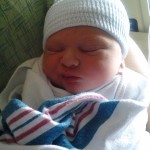 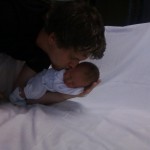