When I was 17 I found out I was pregnant for the first time. My boyfriend and I were without a doubt scared beyond belief but also very excited about the new adventure we were about to take on. I found out I was pregnant April 2005. I was still in high school, but graduated with my class in June 2005. 6 months later our beautiful baby boy, Rayden, was born. It was a very long labour and delivery, lasting 47 hours. With the help of forceps and the vacuum, our son was born on December 12, 2005 at 2:34pm. He weighed in at 8lbs 14oz and 21 inches long.
Before I found out I was pregnant I was 4’11” and only weighed 120lbs. During my pregnancy I gained a lot of weight. I went from 120lbs to a whopping 198lbs the day of delivery. It took over 2 years to lose the baby weight.
Low and behold, October 13, 2008 I found out I was pregnant again! We were once again very excited. We were more prepared and had a much more steady life at that point. This pregnancy was much different, in every single way. I went from 115lbs to 147lbs the day of delivery. I was more achy and tired, and wanted nothing more than to sleep 9 months straight, however, a 3 year old doesn’t really allow that! But on June 23, 2009 at 6:37am our gorgeous daughter, Cairo, was born. She weighed in at 8lbs 7oz and 21inches after only 7 ½ hours of labour and 3 pushes later.
After this pregnancy though, I lost all the weight within 2 weeks. It literally fell off and all I was doing was sitting on the couch feeding our daughter and tending to our son when needed. This is a complete 180 turn around than with my son.
However, I am now 22 and have the stomach of a 70 year old woman that birthed 10 children. My skin not only sags, but is covered in stretch marks from hip to hip. But really, I have learned to love it. It is my battle wound; my proof of birthing 2 children successfully! 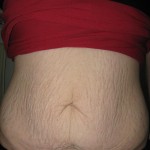 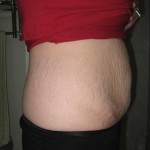 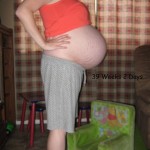