This is a story of redemption. Here’s the story, from the beginning….

I got pregnant for the first time in March of 2005. My first pregnancy was a breeze and we planned to have a home birth with a midwife. I labored for 18 hours at home but due to complications during the pushing phase, I had to be transported to the nearest hospital to deliver our son. He was taken from me immediately to be assessed and because of severe tearing, I had to have a spinal shot and go into surgery. I didn’t get to hold Andrew until an hour after he was born. All of my dreams about his birth (aside from it being un-medicated) were lost. He was, by the way, perfectly healthy, born at 40 weeks and 6 days gestation and was 8 lbs. 4 oz. and 21″ long.

I wanted my second birth to be different. We started trying to get pregnant when Andrew was about three years old and got pregnant on the first try. I was due on December 26, 2008 and eagerly told everyone our news and filled in my pregnancy journal.

It was right before Mother’s Day and I was just 5 weeks along when I started bleeding. I attended church on Mother’s Day, knowing my pregnancy was over, but with peace, knowing God was with me. On May 13th, before leaving home for work, I miscarried. I was actually very relieved.

We gave my body a few months to recover, then my husband was eager to start trying again. We told our friends, family and church family to start praying, even before we conceived. I was stunned when we, again, got pregnant on the first try. I was thrilled to discover that I was due on May 13th, the very day I’d miscarried the year before. I felt like God was at work, trying to somehow “make up for” the pregnancy we lost.

My pregnancy was, again, complication-free. I did have some hormonal issues and anxiety, but the baby and I checked out perfectly at every appointment. I had decreased appetite so I had only gained 12lbs when I went into labor.

I was at 40 weeks and five days when I went into labor at about 8pm on May 11th. I tried to sleep but finally woke my husband up at about 3am, wondering if “this was it.” I worked through my contractions and by 5am, my husband insisted that we go to the hospital. I was checked in at 6am and was already at 7cm dilation, hooray! My contractions were shockingly mild and I felt excited and happy–a far cry from the hours of agony I spent in the bathtub during my first labor.

My doctor was called and said she’d get a quick cup of coffee and I’d be ready to go–she was right. I was ready to start pushing at 8am and Ethan was born at 8:12am. He weighed 8 lbs. 6 oz and was 22″ long and perfectly healthy. Everyone was amazed at how “easy” my birth was. Thank you, Lord!! As soon as he came out, I was thanking my doctor and we were both thanking God!

The nurses handed him to me immediately and we waited for the cord to stop pulsing before cutting it. It was love at first sight and I was able to hold and admire him for an hour before they took him aside to clean him up. I finally got the birth experience I wanted.

We named him Ethan, which means “strong.” Ethan would have been my name, had I been a boy! He came home from the hospital on May 13th, the same day I’d miscarried the year before. That day will always be a happy day in my memory now. God redeemed that day, the baby we lost, and my first birth experience. God’s greatest work is redemption and I am so grateful to have seen it played out in my own life. What a mighty God we serve!

Ethan lives up to his name. He is this exceptionally sweet, happy, adorable baby. Even strangers comment on what an angel he is. He is also very strong and healthy, has hit all of his milestones early and is into everything! He is a tremendous blessing to everyone who knows him and we can’t imagine our lives without him.

Since I gained so little weight during my pregnancy, I was at my pre-pregnancy weight by the time I got home from the hospital and within a month, my weight was lower than it had been in over five years. It was just a “happy side effect” of feeling yucky during my pregnancy–but it sure helped when it came to losing the baby weight!

The henna belly tattoo was from my Blessingway at about 39 weeks along (where I’m wearing the flowers). In the pink bathing suit, it was three days before I gave birth (about 40 weeks and 3 days along). The deflated and faded version of the tree is from less than three hours of giving birth. The red bikini top was from about 1 month postpartum. 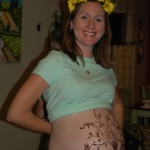 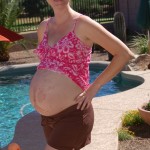 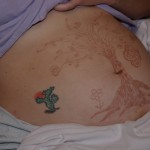 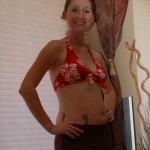 Next post: Twin Skin… 4 babies in less than 4years (Jane)