Like many of you here, I’ve never liked my body. I was a teen mother, pregnant at 18. Before I had kids I struggled my my self loathing, but for different reasons than most. I was too thin, before my wonderful girl I was 87lbs. I did everything I could to gain weight, I ate donuts every day put butter, mayo & cheese on everything I could, tried to be as inactive as I could bear. I was still boney and angular, I felt I looked like an 8 year old, not the woman I was. Who could ever want me, when my body was covered in points? I wore baggy clothes to hide myself and carefully avoided touching people so I wouldn’t stab them with my angular hips and boney elbows. I panicked when people tried to tickle me, because if they touched me they would know how disgusting I was.. Just a walking skeleton. No one could ever love bones, my hugs would comfort no one. When I wore a bathing suit I wore T-Shirts over them so no one would see how my breastbone protruded from my chest and spent the whole time in the water or pulling the shirt away from my body in hopes no one would notice my child form. Well-meaning people handed me pamphlets telling me that there were people who would help me with my anorexia that I didn’t have. I tried wearing multiple layers of stretch pants under my jeans to make myself look thicker, but the biggest pair I owned were size 3. People still handed me pamphlets, brought me plates of food and watched me to make sure I didn’t go anywhere after eating. I understood how they felt, I looked sick and how could that just be the shape I was without starvation. Boys called me “Breastless” as a nickname and teased that I would be a virgin all my life because I wouldn’t ever look like a woman. Teenagers suck.

Eventually I found someone who didn’t see me that way and to make a long story short, we got pregnant. I got stretch marks all over my lower back and breasts, big ones. My face swelled up like a balloon. Towards the end of my pregnancy I got some matching ones on my hips, belly & thighs. My skin never stretched well, got stretchmarks on my tiny hips at 12 and all over the back of my calves one summer. So although I coated myself in greasy cocoa butter 3 times a day, it wasn’t surprising that I got stretchmarks while my girl was growing. All in all I gained 47lbs, my obgyn was thrilled, due to my low prior weight they wanted me to gain a lot. She was born (6lbs 9oz) and I made the mistake of looking into a full length mirror when she was a week old and burst into tears. As time went by, my stripes faded and I got less swollen looking, my weight dropped to 105. I couldn’t understand why my tummy never went away, although I was pretty happy at being able to finally put on some weight and look more normal. I even got boobs out of the deal, although breastfeeding made my areolas stretch much bigger than they used to be. I was pretty ok with the way things turned out, but tried to make sure E never got a good look at my new stomach.

Nearly three years later we got pregnant again, this time a boy. A few of my stretchmarks deepened, my face got swollen again, but all in all not too bad. Except for two days where my legs swelled up like sausages and I got stretchmarks all down the length of my legs. They were so dark and friend kept asking me what happened to my legs, did I fall? It was summer and I wore shorts and skirts in an attempt to keep cool. There was no hiding them. I carried him lower and bigger than my first, everyone swore I must be having twins. The heaviest I got was only 4lbs more than I had gotten with my daughter. Although my the first thing my mother-in-law said when she saw him was that he had my double chin. Two months after I turned 22 he was born and weighted a healthy 7lbs 6oz. The weight took a lot longer to lose and my goal was never to be thin, just less belly. Two years later I was down to 117 and had gotten pretty good at concealing my still loose tummy. However, my stomach is still the thickest part of me and it never really gets better. I lose weight it gets saggy, I gain any it starts there first and people ask if I’m pregnant.

Now it’s been almost 6 years since I had my boy and I’m the heaviest I’ve even been without being pregnant. Admittedly I have been eating more junk food lately. It seems that now that I’m approaching 30, my body is finally gaining weight, much easier than I though was possible. I don’t really care about the number on the scale, my doctor says my BMI is right where it should be.. But I feel fat now. I know I’m not but clothes just don’t fit right and seem to always make my stomach look big. I think because I used to be so thin, it’s warped how I see myself. After all I’m 6-7 sizes bigger than I was before, so feeling bigger than I was is inevitable. I could work out more, but I’m afraid I’ll get too skinny again. I never want to be that girl again, but I wouldn’t mind loosing the stretch marks and maybe being a little more tone. I’ve got hips now, but also a muffin top. My husband (the same guy who was the only one to call me beautiful) insists I look great, but I can’t believe him even though I know it could have been worse. I’ve thought about having more kids, but we can’t afford it, two is enough for now. There’s also a part of me which is terrified as to what another baby would do to my body.

This is what I look like today and even though there’s a few things I’d change, if I couldn’t I’d be at peace with it. There’s more to my story, but I tried to keep it more about the physical changes that came with my children. 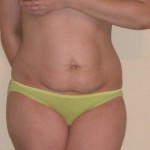 Next post: Trying to be Patient: With My Body and My Husband (Anonymous)