I am a young 20 year old mother and wife! My son is now 10 and a half months old almost reaching his first birthday coming up in april on the 25th! I am so proud to be a mother and even though it would be amazing to have my prepregnancy body again, I would never trade it back if it werent for my little boy Aiden. He is the light of my life and he is what makes up my world as well as my husband. I dont know what I would do without my little family and I am very blessed to have both of them. I had a rough pregnancy with my son (my first and only pregnancy) as I had contractions on and off ever since I was 7 weeks pregnant. The contractions became more and more frequent as my pregnancy progressed and they were always very scary. I took myself to the hospital numerous times always scared that my son was going to be delivered that day! My son held on tight until his gestation was 39 weeks! I was on bedrest every since I was 7 months pregnant which made it difficult as I was still a senior in highschool. Luckily I had a tutor come to my home to help me finish up my credits so I could graduate which I did 3 weeks after my son was born. We had come a long way and are very glad we are where we are now. I gained 70 pounds during my pregnancy due to inactivity and eating everything in sight. I lost 52 pounds and need to lose another 18 pounds to get back to my prepregnancy weight. At this given moment though we again are both going through yet another trial in life as my son was just diagnosed with silent acid reflux. The doctors or I didnt even have a clue of him ever having acid reflux as he had no signs of it. That is why it is called silent. instead of him throwing up, his food was constantly going up and down his esophogus making it raw and painful to eat. This had gone on for almost 5 months with him not eating! We just thought he wouldnt eat until finally the doc ordered him to go to the feeding team to be evaluated. Finally it is all figured out and he is now eating with his special recipe of very concentrated formula plus a calorie booster and a food thickener. he is doing great and I can tell he is already gaining weight and he finally has a full tummy! Here are my pics, the first one is when I was 2 months pregnant, the 2nd is when I was 8 months pregnant, the 3rd and 4th pics are my stomach 10 and a half months postpartum and the last one is a recent one of me and my little boy on my 20th bday! Thanks to everyone and their kind words! 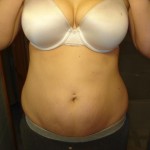 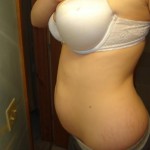 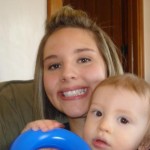