Age: 26
Number of Pregnancies and Births: One Pregnancy, One Birth
Postpartum: Three and a Half Months

I have been through the entire gambit of physical appearance. I was born a healthy baby. I was in the 90’s as far as my percentile was concerned both in weight and height. By age four I became ill with mono and became a skinny, waif-like creature. I remained that way, skinny and tall for the rest of my childhood. As I progressed into the world of womanhood, I didn’t really feel I looked the part. I was still very skinny. No hips, no breasts, no curves. Then in college I really began to put on weight. All of a sudden, I had curves where I never had. I looked like the woman I had wanted to be when I was rail thin, but now that I had that body, I hated it too. The reality of having those beautiful curves, was that they came with some that were also deemed not to be, but times were hectic and I had a lot to do. As life went on, I continued to gain weight at a slow and steady pace. I went from being a slight girl at 120 lbs, an athletic girl at 145 lbs, a curvy girl at 165 lbs, and in my mind, a fat girl at anything above 170 lbs. So, needless to say, when I became pregnant at 228 lbs, I was pretty much disgusted with the reflection in the mirror.

When I was in my 11th week I was tested for gestational diabetes. At first they said I did have it, then they said I didn’t. Never-the-less, the fright of potentially having it convinced me to remain on a strict diabetic diet. I spent my entire pregnancy either nauseous or hungry, but I refused to let food get the best of me. I wasn’t going to let my weight endanger my baby. I hated every minute of it. By the end of my pregnancy, after it was all said and done, I had lost 20 lbs and I had given birth to a beautiful baby girl at 7 lbs 10 oz who had zero complications.

I looked in the mirror and found a body that was more slender most everywhere. My legs, my arms, my face even. The stretch marks had been very few, only mild extensions of the ones I already had. The thing that would not let go though was the belly, a sore spot I’d always had. No jeans fit. I don’t have the waist any jean company seems to think I should have. (Oh my God, is THAT why my mom wears her jeans up to her boobs?!?!) I would look in the mirror and see a beautiful woman, sans-belly. But let’s face it; you’re not going to have a nice butt, nice boobs, and NOT have full thighs and some tummy. Pictures everywhere try to convince you otherwise, but that is not the true anatomy of a woman. A woman has curves, EVERYWHERE, and all of them are beautiful. Especially on a mother!

I look back on it, and I realize, I always wanted what I didn’t have, and when I got it, it always came with something else that somehow didn’t fit the bill of beauty. Why? Why was that? It was as easy as looking at the thousands of crappy infomercials that bombard us. Self-hate pays. To loathe parts of your anatomy is what sells that perfect sit-up, that push-up bra, that plastic surgery, the gobs of make-up. If I looked in the mirror and thought to myself, I look beautiful…what could they sell me? Nothing. On the other hand, if there was something I always needed to fix, then there is always a “fix-it” product they could shove down my throat. Even with this realization, is has been so ingrained in me that I must look a certain way, I still struggle with the new form my body has taken. I am hopeful that at the sight at all these other beautiful women, I will come to find more and more strength as each day passes. Thank you for being there, thank you for reminding me. I will not deny the beauty of the transformation my body went through to make my gorgeous daughter, nor the meaning it possesses. Because I can’t. Now my beautiful little girl is also well into the high 90’s in her percentile of growth too (just like her momma), and when I look at her, I see the most beautiful little girl there ever was. And she needs to know that, so when every other infomercial tells her otherwise, she can remember the loving words of her mother, “You are beautiful,” and believe it, because her mother never looked in the mirror and said “I’m fat,” or “I’m ugly.” 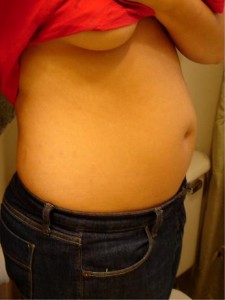