My youngest turned 3 this week. The last time I submitted to SOAM she was a month old and my world had been rocked. I want to thank everyone for their kind words at that time. They meant very much to me.

On our first trip to the cancer hospital we were told my husband had on average 24 months to live. He died 24 months later, 5 days before his 35th birthday. I have been an only parent (on paper) for almost a year now. The cancer itself was nothing like in the movies – there were trips to the hospital and ambulances and a deathbed, but I had cried most of my tears the first 6 months after his diagnosis. That is when I had to come to terms with the fact that my life would be different than I’d thought. I have so many friends now going through divorces and marriages and infertility…. I don’t know that many people’s lives go according to plan.

For the two years he lived, I coped. I was caring for the kids and my husband, and I had nothing left to give myself. I enrolled in a program to get my teaching degree, which I continue to work on part-time. I felt like I had no time for health or for fitness, so I just existed. I don’t know that I was depressed, I never went to the doctor…. I was on autopilot and going through the motions until something got better. And as horrible as it may sound, things got better after my husband died. I was able to think about me again. However, I didn’t come to that realization until January of 2017 when I went to put on some pajama pants that had always fit and found they were much too tight. In February I joined a gym, and I continue to go every day. The kids go to child-minding and I get some me time.

I started just by taking classes at the gym; I was able to hide myself in a corner until I gained some confidence. In July I did my first Spartan (obstacle course) race with some friends and I finally had a training goal; this mother wants to be able to pull herself over an 8 ft high plywood wall. It’s not a typical goal, but it’s mine. I’m gaining muscle all over my body. I am in the best emotional and mental and physical health of my life. After surviving my husband’s illness, I know that I am strong on the inside. Now I am working to make my outside reflect that.

I love myself, and I am unstoppable.

The pictures I’m including are me in April 2017 and me in October 2017 and are the result of proper nutrition and exercise. I’m also including a picture of my belly when I do a plank because that’s also how I look. 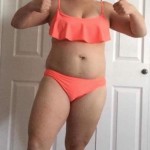 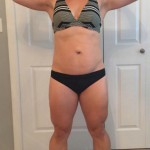 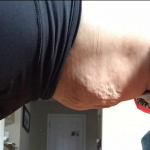 Previous post: I just weaned my last child! (Mom of 3)