Unplanned, But Not a Mistake (Anonymous)

I was 15 years old, the “boy” I thought I was in Love with, had just broke up with me. I decided to get back at him by sleeping with one of his friends. It was just suppose to be a one time thing just to make my ex, the guy i thought was the love of my life, mad. Well a month later, no period. I took a pregnancy test and it said positive. I was just in complete shock. The guy that was just suppose to be a one time thing, just became the father of my child. At first I kept saying I was going to get an abortion, b/c the father was black and I am white. I didn’t want to deal with all the looks and shame people were going to give me, and because the changes that my body would go through. Then I thought I don’t even believe in abortions, and who cares if i get big? After about a month into the pregnancy, I went in to have my first ultrasound. As soon as I saw MY baby on that screen, I FELL IN LOVE!! I decided I was going to keep the baby. I knew having a baby at 15 was going to be extremely diffucult. But I was willing to accept the consequences. On January 2, 2008 I gave birth to a perfect 6 pounds 4 ounces baby girl! She’s 18 months old now and i’m 17, people do stare at me sometimes, and I get rude remarks, but it doesn’t bother me. All that matters is what I think. My friends ditched me b/c I couldn’t just drop what I was doing anymore to hang out with them. A irresponsible act gave me the greatest gift ever. I wouldn’t trade my baby girl for anything in this world! I truelly have found the love of my life.
I love my body, and call my stretch marks, Beauty marks. I look at my body in the mirror from time to time and think, I brought a beautiful baby into this world, and I would go through all the changes again, in a heartbeat. 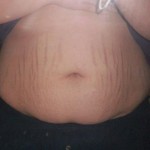 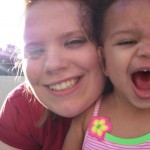