I’ve been visiting SOAM for the last four years since I had my daughter and I wish to thank warmly all those wonderful women who’ve had the courage to post their stories and voice out their fears. You have all been truly inspirational and sometimes, reading these stories was the ONLY thing that kept me from plunging into despair after I had my baby girl. I have always been overweight (I had to be fed low-fat milk as a baby so as not to put on too much weight), and the “thinnest” I have been in my adult life was 64 kg, which I managed to reach before my wedding in 2003 by following a horrible diet and abusing a bit on laxatives. I had my baby girl in 2006 and put on 27 kg during the pregnancy and was absolutely devastated at the state of my body after that. Over the next four years, I managed to lose 25 kg through on-and-off diets and religious exercise. I was very scared to have another baby for fear of what it would do to my body and my health again, which was fine because by that time, my marriage had somewhat broken apart and my husband and I were not having sex. Then, after a wonderful holiday in December 2010, things got patched up and we decided that having another baby would not be a bad idea, and I quickly fell pregnant in January 2011. But I had a very difficult pregnancy…I started bloating at 2 months, was anaemic throughout the pregnancy, my husband had to travel when I was 4 months along and we got robbed while my daughter and I were alone in the house, I lost all my wedding jewellery and a lot of money, had serious car problems…all that stress made my blood pressure soar and I was diagnosed with pre-eclampsia and had to undergo and emergency c-section at 33 weeks because my placenta had started tearing apart from the high blood pressure. After the operation, my BP still wouldn’t go down and I had to be put in ICU for 48 hrs. I felt like hell after the op. But my baby boy was in the incubator and I had to go to the clinic to try and breastfeed him everyday. After I finally came home, I had to learn caring for a premature baby (plus dealing with my 5 year old) and had no time or energy to care for myself. I started dieting and exercising about 3-4 months pp and managed to lose 9 kg in 3 months (I put on about 15 kg with this pregnancy), again by following a hell of a protein-only diet and forcing as much exercise on me as I could possibly handle. Despite all these efforts, I still feel heavy, bloated, and look like I’m still 5 months pregnant. My gynae says that my body went through major trauma during the op, my tissues are all mushy inside, my uterus is badly ruined (he’s been practically screaming at me NOT to have any other babies), so that’s why I will take more time to recover than if I had a normal delivery. I’m now running out of strength when I see that fat, massive 5-months-preggo-looking belly of mine. I don’t care about looking good again or about the stretch marks (I know I’ll forever have the pouch…it doesn’t bother me because my marriage is on the rocks again and I don’t think my hubby and I will ever have sex again, so there’s nobody to see me naked again), I just want to STOP feeling so huge. I know I have to be strong for my children, but after all these efforts, still having this massive weight to carry around is starting to bring me down. I am now 7 months PP and I’m starting to think I’ll never be my ‘normal’ self again.

The pics are me 7 mo PP and my daughter (she just turned 6) and son. 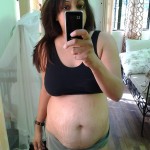 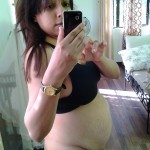 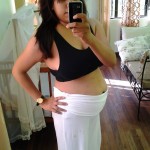 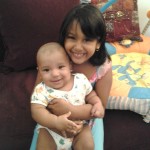