So, I came across this website sometime in the last three years. I have glanced at it over time and read some of the submissions. I have hated my body, been disgusted, even resented my children at times for causing my body such changes. Before I had children I was in incredible shape, I was going to start working towards figure/bodybuilding competition. I informed my husband that I couldn’t do both, compete and have kids, at least not at the same time. I explained to him what such extreme training can do to your period and your cycle. So we chose to start our family. I was roughly about 150lbs pre-pregnancy the first time. I gained 50lbs with him, I was just over 200lbs by the time I went into labor.
There were two years in between my children, and I can honestly say that I didn’t make enough effort to loose the extra weight. I didn’t think there was much point since I was going to be getting pregnant again. So I became pregnant with baby #2 and weighed somewhere around the high 150’s. Again I gained 50lbs. Not to sure how this happened since I was more aware of my food choices, chasing a toddler and working a full-time physically demanding job! At time of delivery I was around 210lbs.

Three years later I have hovered between 186 (my highest) and 168lbs. I have even stopped taking hormonal birth control and have chosen to use a fertility awareness method, tracking body temperature and such. I am currently having my thryoid checked on a regular basis, since it seems to be just low enough to register, but not enough to really deal with it yet, so my doctor tells me. It has taken me three years to work up the courage to post to this website. While I have still chosen to give another name (my own, but not my common one), it would seem I’m not completely comfortable, but maybe this website and my story and pictures will help me to accept my own tiger stripes. Maybe someone else can relate to me.

On a side note I have recently kicked my exercise habits into high gear with some intense tabata training, bootcamps, cardio and heavy weights, so we’ll see what the next few months brings. But I think this came with a new awareness, understanding and acceptance of my body as it was! My battle scars! 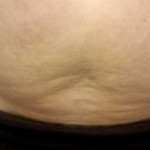 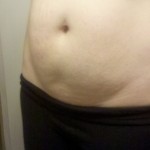