The Thoughts that Plague (Elizabeth Ashby)

I had split up with my boyfriend 2 weeks before I found out I was 8 weeks pregnant with my first daughter. Before the pregnancy I had never been over 50kg in my life (I am 5ft 1in). I smoked 50cigarrettes a day, smoked a lot of pot and drank too much beer. After finding out I was pregnant I completely stopped pot and beer immediately but was only able to cut back to about 5 a day (max) cigarettes. Depending on how sick I was on any given day.

I had intense migraines where I would not be able to move and my housemate would have to pour bits of water into my mouth to try to help me drink. I barely kept any food down the entire pregnancy and swelled out to 65kg.

I complained to my G.P about various problems I was having and he told me I was “a paranoid first time young mum”

At 6mnths I quit work because I was just too sick to continue and moved in with my mother. However as there was no room there as soon as my centrelink was approved I moved in with my ex-boyfriends parents.

When I was 36weeks gestation I woke up one morning at 5am surrounded in blood. I thought I had miscarried. I cleaned myself up as best I could and went and knocked on my ex’s parents bedroom door and asked his mom to drive me to the hospital.

We got to the hospital and after examining me and stabilizing me they informed me that we had probably arrived with around half an hour to spare for my life.

They performed an emergency c-section and my first beautiful daughter was born at 4 lb 2 oz.

When I asked why this had happened they said I had pre-eclampsia but not to worry it shouldn’t happen again.

My wound came open once about a month later and got infected but I gained control and it healed tho the skin for about 2 inches above never really stopped being sensitive.

My ex and I started out our new journey of parenthood fairly angry with each other and fought a lot. However slowly we started to become friends again and then one day we both admitted we were still in love. We got back together when she was 8months old.

I got back to 54kg just before her 1st birthday and proposed to him. He said yes.

We ummed and uhhed about wanting another child and then near her second birthday we decided we did.

We got my implanon rod taken out and 2months later I was pregnant.

The bleeding started at 5 weeks. The migraines, swelling and other issues started again.

This time I didn’t rest until we found a doctor who would look at my problems properly.

Also I was leaking the amniotic fluid but we were not aware because it was not leaking out of me. Just going into my body somewhere.

At 18weeks a doctor told me that there was a minuscule chance she would be survive and I should have an amniocenteses. I have normally always been against them but I was in so much shock I just agreed.

He put the needle in and it hurt like hell I could feel it wriggling inside me. He then said he’s missed the amniotic sac and would have to try again.

By this stage I was crying. He did it again and once again said he’d missed and wanted to do it again. It was all I could do to choke out “no” and when he tried to argue with me my sister who was with me stood firm for me. He backed off.

So of course I had gone through this horrible experience (my husband said I screamed in my sleep for two weeks afterwards) for no results.

At twenty weeks they told us that we should prepare for the worst. That we were not past the stage where she was a “legal human life’ and that cremation/burial were legally required and if we wanted a funeral.

The entire time they had been berating me for not getting more bedrest. All I could think was you look after my other daughter then!

At 24weeks I went into the hospital for another checkup (they were weekly) and my doctor said she was admitting me immediately as my blood pressure had sky rocketed and therefore the pre-eclampsia was back.

At 26weeks it went even higher, beyond fatal high and they said they were doing another c-section. They weren’t sure how soon. (I was now 73kgs)

My mother fiancé and I spent a horrific 24hours in a hospital birthing suite whilst listening to other women screaming while giving birth. They injected me with something and it felt like my veins were on fire for hours and hours. They kept inserting my catheter wrong but wouldn’t let me go to the toilet properly so I was in pain and discomfort and had to keep getting my gown and sheets changed. My poor mother and fiancé caught my attitude as I got more and more upset.

Finally they told us I was going in. we waited in the anesthetists room for half an hour before they told us it was on hold again. Back to the room we went.

A while later we were back again. They told me I should sit up for the epidural but I told them that for my first c-section I had almost knocked out the nurse leaning over me cuz my back had spasmed when they put the epidural in. He tried to put the epidural in 4 times with me lying down. Then 4 times sitting. He got it on the 8th try.

I was in immense pain the entire time with shooting pains between my hip and knee on my left side and pain all up and down my back. I was crying hard.

My fiance had just stood up to tell him no more when he said it was in. (I have since found out that it was a training doctor. Not happy!)

The surgery went well so to speak. I cried the whole way through, barely remembered her cry when she was out. Then I remember them saying they were going to have to put me under as I was too distraught.

I woke up in a kind of waiting room. My sister came to visit me and said my fiancé was upstairs with the baby. She was born 661g.

I finally got released about a week and a half later. It was extremely hard being in my room with other mums coming and going who had their babies.

An exact month after she was born we got married. A small ceremony with only immediate family and friends at my in-laws house. All up including the celebrant was $1000. (Australian). (I was very proud of that since we do struggle financially but still didn’t want a registry wedding)

When she was 4 ½ months old they finally released her. On oxygen. At 8mnths she came off it during the day then at 9mnths she came off it completely. So it’s still early days but it looks good. She has chronic lung disease and we will have to watch out for so many things throughout her life and have so many doctors appointments but she’s made it.

I am now 77kgs and although I have not increased in weight since our wedding I have not been able to loose any either. I walk and eat well. My wound has come open 3 times so it’s a constant battle.

I have been diagnosed with chronic depression dating back to when I was 13 from having an emotionally abusive relationship with one member of my family. I have been able to battle it with an amazing medication although we are still trying to get a councilor for me that I can afford (the only one we had didn’t want to talk to me because she didn’t think she could help me she claimed).

We have been told that we shouldn’t have any more children. They said the same things would happen and even if they baby survived I very likely wouldn’t.

I am slowly getting better with my image of myself (my husband is amazing) but I still definitely have my down days so I come on the shape of a mother and it helps me lift myself back up.

My thanks to every single person who has helped me in my life and everyone who has posted on here for helping me be a better me.

first photo: before my pregnancies getting ready for work.
Second Photo: when my first daughter was about 11mnths
Third photo: me in my wedding dress and my eldest daughter
Last three photos: me today. 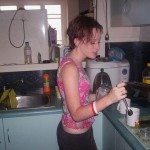 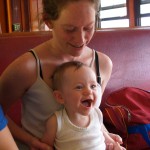 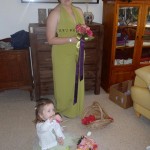 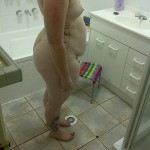 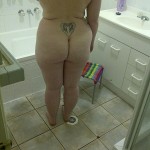 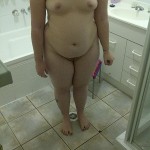