Still not quite where I want to be (Kris)

At the age of 24, i was single, in college, and living alone in a new town. I was enjoying the single life since it was the first time in my adult life that i had been single for a significant period of time. In fact, I was entertaining the idea of committing to a life a spinster hood. However, I met my son’s dad and after knowing him under two months, i found out i was pregnant. I wanted to keep my baby, so we decided to give us a try and he moved in with me. Within 4 months, i realized this man i was about to raise a child with was a severe alcoholic, and not a very nice one at that. But i stuck it out in hopes that everything would just work itself out, which i know now was stupid. I was in a relationship that put me in a constant state of stress, always worried that id come home to a hostile drunk, not having a supportive partner to help me in this difficult period of my life, feeling unloved, and completing my junior year in college. So i turned to food. I was gaining close to 8lbs a month, so at 5’0, i went from my prepregnancy weight of 135 to 205 by the time my son was born. I was miserable. I felt so ugly.

My son was born via csection after being two weeks over due and a failed induction. After he arrived, my weight stayed around 178. The first few months of his life were difficult, i tried to work on my health and getting back in shape, but the combination of my senior year in college and an unpleasant homelife drained me of all my energy. When my son was six months old, i finally realized i needed to leave my son’s father, so i moved us into a new apartment and i graduated college. Since then, I’ve worked housekeeping jobs and watched my son grow into a beautiful person who i love more than anything in the world. 2.5 years later and i am finally committing to getting healthy and getting my life on track. i am working out 3-5 days a week and eating better while working on my application for grad school. So far I’ve lost 10lbs, but I’m worried that my tummy, which used to be my favorite feature, is going to always look gross and saggy no matter how much weight i lose:(

The photos i am posting are of me 2.5 years postpregnancy and168lbs. I’d love to hear if anyone knows if with diet and exercise, i can get my tummy somewhat back to normal or if I’ll need to consider surgery. 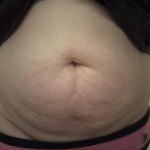 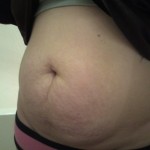 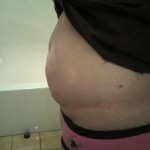 Next post: Listen to SOAM on the radio TODAY!