So Much Stronger (Hannah)

My story of motherhood begins on New Year’s Day of 2011, when, only eight weeks after our wedding, I handed my new husband a pregnancy test with a big blue “+” on it. We had been hoping to have children soon, so we were both surprised and happy. We got to see our little man on Saint Patrick’s Day, and, although I had known I was pregnant, it really hit me that day that there was an amazing little wiggly 16 week old person in there, with fingers, toes, and a face he wouldn’t let us get a good look at yet.
One month later, we got a look at his privates and give him a name. As Sean developed inside of me, I fell so in love with those kicks and bump and hiccups, and when I was around seven months pregnant, my husband and I had fun feeling around for his sweet little butt and elbows. I went into labor at 41 weeks, having gained 25 pounds, which doesn’t sound like much, but on a 5′ frame, it was plenty, and I was anxious to meet my son. I had wanted so much for a completely natural birth, but after three days of hard labor, we decided to opt for an edipural. My (highly needle-phobic) husband was so incredibly supportive the whole time, I am still amazed by what he went through with me. He held me, rubbed my back, got me drinks, etc., on and off for about 72 hours, while running on about six hours of sleep, a small coffee, and an order of french fries.
Finally, after an hour of pushing, Sean entered this world into his father’s waiting arms at 12:51 a.m. on September 10th, and weighing 6lb. 14oz. He had some trouble breathing at first, so the doctors kept him in the nursery for two days. I am so thankful for the nurses who took the time to notify me when he was hungry, so I could start breastfeeding, even though he wasn’t in the room with us.
Now he is a healthy 16 pounds, and breastfeeding has been so good for both of us.
The majority of my pregnancy weight came off in the first few days after birth, and I could wear my “fat jeans” within one week. By three weeks, I was back into my old jeans, and although I still need to continue toning up the lost abdominal muscle, I am happy with my weight loss overall.
One of the things that has impressed me the most about the whole process of pregnancy and childbirth is the incredible strength of the female body. The fact that we can grow and nurture another human being within us, and then give birth to them, is astonishing. It shouldn’t possible, but it is.
Whatever we are left with afterward, whether it’s a couple extra pounds, some sagging skin, or permanent marks across our bellies, should remind us that we are the bringers of life to this world, and that we have accomplished the impossible.

The photo is of our sweet boy 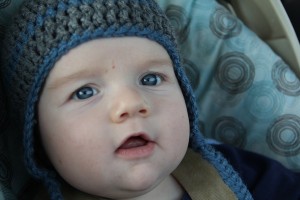 Previous post: Long Story Short: I need help with all this. (Elisabeth)