In 1991, my then 73-year-old mother visited me in Paris for my 36th birthday.
She’d made the long journey from the Dutch countryside by train, and while brewing a cup of tea, I drew her a bath.
Unable to get out of the tub she called for help.
While I’d often seen NIta in the nude as a child, it had been 30 years since I saw her completely undressed.
“Now you’ve seen it all,” she said, no doubt in response to my gaze.
She caught me taking in the slack, creamy skin of her deflated stomach, the nearly hairless pubes and surprise, surprise, her, our, my labia.
Would my body be like hers, I wondered.

A year later I was about ready to give birth.
Throughout my pregnancy I had continued my yoga practice and Jane Fonda’s exercises for pregnant women.
Fonda created the book with a midwife, who in the last chapter warned against the danger of a vaginal breech delivery.
Our breech baby Ariane Eira suffocated, just like the midwife described, during the last five minutes of her birth.
The past nearly 18 years it seems I’ve attempted to keep my stomach round, filling the empty skin, not wanting to view or face the emptiness.
The ten years following our loss I got pregnant four times, each pregnancy ending in a miscarriage.
After a “missed abortion” in 2003, I decided to stop trying to have another baby.
No longer trying to have a family, I focused on what we, my husband and I, had and could have together, just the two of us.
We got a puppy. I remember the moment I felt her heartbeat on my chest, a subtle reminder of earlier loss.

These days I’m working with a personal trainer to get back in shape, I enjoy the rediscovery of a former self.
As the fat burns away and my muscles tighten, the empty belly remains,
Other than that there’s the seldom shared, elongated scar on my perineum, which unlike the scars on my heart, is another visible proof of my motherhood.
My mother and I, so alike in so many ways, except for the daughter she got to see grow up and I had to let go before I could feel her heart beat outside of me. 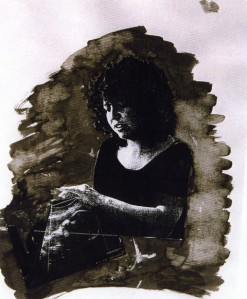 Previous post: Not the Perfect Coach – Own Your Beauty