I did want to be a mother, I do enjoy being a mother, and I love my son more than I could ever have imagined. And yes, I describe my stomach as appearing to be uncooked dough that has been mauled by a bear.

My pregnancy was exhausting. I had all these grandiose plans about eating right and exercising throughout my pregnancy, but they lasted all of one week. Then the fatigue set in and didn’t let up until about 17 months post partum. I spent the majority of my pregnancy sleeping or in front of the computer. Some days I could barely drag myself out of bed. There was no working out and there was no cooking delicious and nutritious foods. I gained over 70lbs. Already overweight pre-pregnancy, I was huge and constantly asked if I was carrying twins.

After my son was born, I gained a new appreciation for my breasts as they nourished him (every hour!). I also gained a new respect for my body as a whole. It had accomplished an amazing feat! Respect I had, but not love. I had expected my body to look somewhat distorted after I gave birth, but I figured that it would slowly go back to what it had been. I was very wrong.

About 2 months post partum my husband caught a glimpse of me in only panties. I could see in his face how disappointed and even disgusted he was at the sight. I almost cried. He didn’t mean for me to see. He loves me and swears he still finds me attractive, but his face that night was enough to hurt me deeply. Especially since at 17months post partum, while I’m slightly smaller, my stomach still pretty much looks the same. I’m like the Saggy Baggy Mama.

I have not yet come to accept and love my body. Maybe someday I will. It was worth it, because my son is the light of my life and every day he makes my world a little brighter. And he loves his mama, even if she looks like uncooked dough that has been mauled by a bear. 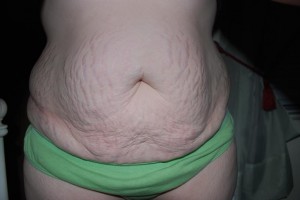 Next post: My thoughts, fears, and joys of being a mother (Stacy)

Previous post: It helps to know I’m not the only one (Anonymous)