Pregnancies shouldn’t be this difficult. (Shelby)

Are you ready for this?

Okay, so I was a Virgin until I met the father of my children, I was 18, he was 21.. We wore condoms religiously until it broke one time and after i didnt get pregnant we really didnt worry. So, a year goes by and we just thought maybe one of us was reproductively broken in a way of words. BOY WERE WE WRONG! I got pregnant with our son, whose now 20 months old close to our 2 year anniversary, it seems nice except, the father wanted to just be wasted and not be there for me thru my pregnancy. I lost 19lbs the first trimester from the horrible constant all hours of the day vomiting. He never really was connected with me like I wanted him to be. I can count on one hand how many times he whillingly touched my stomach to feel our son kick and it tore me apart inside. 2 months after I had our son my boyfriend was apparently talking to other women bc I ended up having an episotomy from hell, cut all the way to the side of my poor butt hole, couldnt sit for a month and i was mad b/c I put my body thru hell, I feel like I ruined myself for a man who just wanted to use me for his own pleasure and giving him children and not bothering about how i felt about it all. I was 19 when i got pregnant and 20 when I had our son. Well once we could have sex again things seemed to change as horrible as it sounds, but we ended up breaking up after he tried to mount a supposeable friend on new years.. I gained 40 lbs after i left him and moved back to my home town, well I missed the bastard and we got back together after me taking care of our son by myself for over 6 months.. when my son was 10 months old we conceived our daughter again dispite my constant urges to wear condoms, he would literally rip them off while we were having sex. So i was very depressed when I conceived my dauther, then we found out she had a dialated ventricle in her brain, it was HELL going to the specialist 2 hours from home, and on top of everything he left me when i was pregnant b/c he is a meth addict.. he came around me and my son when he was on it, he hung out with this girl i used to be friends with and she taught him how to shoot up, I caught her in our bed, him in the kitchen going to get a spoon to OD himself, If i hadnt have walked in the house to catch them b/c he wasnt answering his phone after our son was hurt, he wouldnt me here. well none the less i called the cops on him. he went to jail sobered up got bailed out, moved in with his mom. relapsed when he moved back and i was the one AGAIN to find the needles in the garbage, I went thru going to the specialist on my own, living out of boxes sleeping on a couch with my son at my mothers house, being used by the man I devoted my entire life and body to, worrying what possible std i couldve contracted weither it be hepatitis or herpes b/c of the girl we has shooting up with is the town WHORE… I wanted to literally die, to not give birth to my daughter b/c she didnt deserve to live in a world like this.. well I struggled and struggled and didnt eat for days at an end b/c of everything that was going on.

thankfully I made it thru everything, had my daughter, tore slightly, my vagina is not the same, my stretch marks from my first pregnancy only grew a little on the top, but now my skin sags im terrified to lose weight b/c i dont want to sag further. The father of my children came clean with everything he was doing, deleted all the druggies out of his life, removed all the paraphenalia from the house, is waiting to be charged with a possible felony, was there for hte birth of our daughter, IM BEYOND HAPPY HE WORE CONDOMS WHEN HE SLEPT WITH OTHER WOMEN and didnt give me anything. im struggling with my body image and the constant horror of everything thath append, the feeling of betrayl, NO PREGNANT WOMEN SHOULD HAVE TO SUFFER LIKE I DID.. There is sooo much more to my story, I deal with overwhelming Panic attacks and Flashbacks of walking in on him and her and the look he gave me and all the lies he told me for nearly 9 months, the persistant presence of other women he was interacting with and making me feel like i was there to give him children, to do what he wanted and that he deserved to have his pie and eat it too along with some cake on the side, thinking about it disgusts me.. We are going to go to counseling, but everything thats happened.. its all too much to bare..

Im 6ft tall, before my son I was 190 average, after my son i ballooned (or atleast i felt that way) to over 240, size 36 pant, none of my pre pregnancy pants fit. My daughter I was 220 pregnant (massive weight loss due to major depression) After I had her I lost over 30 lbs from delivery alone, now Im back up to 220 post pregnancy, I do not love myself, Im horrible depressed, If it werent for my children id honestly be 6ft under.. I dont know how to be happy anymore, I cry every night before bed and the boyfriend is to the point where he doesnt want to talk about it bc he has a bad heart (genetic & drug induced) he has been having mini heart attacks @ only 25 and sometimes i wonder if it would just be better to let him find someone else to make him and happy and my children me and my stretch mark riddled body just go make another life & me be a single mother because I will NEVER let another man get close to me to hurt me like he has.

Ill include some pictures taken the day before I had my daughter, I had cried the whole day & my neighbor lady took them and insisted I smile…

~Age: 22
~Number of pregnancies and births: 2 Pregnancies, 2 births
~The age of your children, or how far postpartum you are: 20 Months boy, 6 weeks girl PP 6 weeks 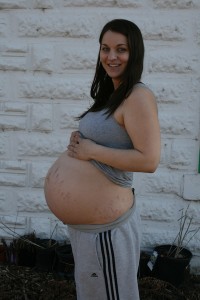 Next post: The Road Map of California (Miss Jones)