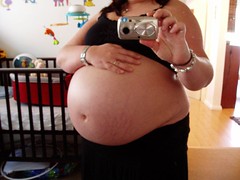 I will be quite busy for awhile and there likely won’t be any new entries until late next week. I’ll try to update if I get the chance, but I wanted to drop the note to say I’ll be back and see you soon! Keep sending in your submissions – I have a few in my inbox but don’t have time to add one tonight so I’m sharing this photo instead (it’s been WEEKS since I’ve done a POTW anyway!). I love this mama’s pose. The crib in the background just waiting for a sweet babe to hold. The tiny patch of “tigger stripes” on the side of mama’s belly. The camera in the shot makes it seem intimate, as though we are let in on this secret moment between the mother and her own mirror. Thanks for sharing! Everyone else – see you soon! Peace.

in Featured Photo
6 comments… add one