I’ve been planning on this post for over a year. I visited this site frequently, before, during and after my pregnancy. I love reading all your stories. There is something I can relate to in each one. I think us women should remember that we are more alike than we are different. So I am honored to be able to share my baby/mommy story with others.

My husband and I became pregnant with our first daughter in November 2008. Naturally, it was one of the best days of my life. The first 14 weeks were a real nail-biter because I had had a miscarriage July 2008 at 12 weeks. During the first trimester I had daily ‘afternoon’ sickness. I’d have to veer my Jeep off the road coming home from work, swing open the door and, well, you know! Needless to say, I actually lost a few pounds. When that passed, I ate ravenously for the next 6 weeks or so and gained 20 pounds stat. My weight gain, and appetite stabilized for the remainder of my pregnancy and I gained about 1lb a week until the last three weeks when I gained nothing. The total was 35lbs on my 5’4″ frame.

I didn’t try to control anything during my pregnancy. I decided to let my body dictate what it wanted. I ate when I was hungry and went out for a walk when I felt like it (which was not very often :-). There was no exercise or nutrition regime. I tend to eat healthier anyways though I still indulged my cravings for Ben and Jerry’s and Cheetos. Two words to describe my pregnancy : sick and tired.

My sweet baby girl was born after 7.5 hours of labor. I labored for 5 hours at home and by the time we got to the hospital I was 10cm and ready to go. Trust me, that wasn’t planned. I didn’t expect my first pregnancy to progress that fast. I thought I had a good 14-16 hours or so! The nurses were debating having me deliver in triage. But my husband made them wheel me to a suite, which was a good thing because I spent the next 2 hours pushing. No progress! And NO medication! Mercifully, the attending doctor gave me the option of a forceps delivery which I readily accepted. When her head crowned, it was the most intense pain I have ever felt! No wonder they call it the ‘ring of fire’ :-) But it WAS kind of spiritual in a way and I’m glad it was there. A few minutes later my beautiful baby daughter Anna was born at 5lbs 15oz. I was on a ‘baby high’ for the next few weeks I was so happy! I honestly didn’t even get the baby blues.

I never got her to latch on without a nipple shield (&other reasons) so an Ameda double pump was my best friend for the next 3 months. I had to use nipple pads from the 4th month of pregnancy until I stopped breast feeding – leaking sucked. By the way, my breasts are not as perky as the sports bra in my ‘after’ picture makes them seem. I wish. That’s my biggest post-pregnancy body change.

At 3 months, after I switched to formula, I lost another 10lbs. Also around that time I began to lose my hair at a pretty alarming rate. I do have super long hair which is probably why it seemed so bad. But it has recently begun to taper off. Phew!

I love my daughter sooooo much! I never gave her a pacifier so she sucks on her ring&middle finger to soothe herself. She started sleeping through the night from 7pm-7am around 3 months and is eating 1st foods. I am so proud of her! I give her baths in the tub with me and she’d rather play with her shampoo bottle and the silver tub hardware, than her toys. She is such a joy! We definitely plan to have another child in a few years – I’ll keep you updated! 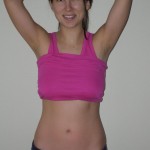 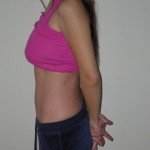 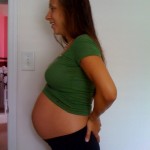 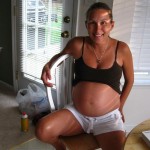 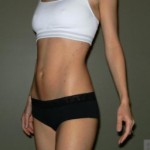 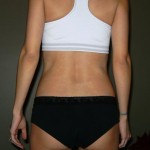 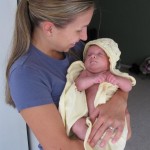 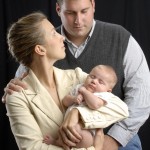 Next post: Starting to Accept My New Body (Anonymous)