My story starts in March 2007 when i decided to move to another country and start a new life. I was bored of my life, my job, my city and i felt very lonely and depressed. It was a great choice as i started on a new path with lots of joy and happiness. I managed to get a job a week after moving abroad and i met the father of my son at work. We knew each other, but never talked until one day when he had to supervise my team and he invited me to a pub. We started going out a lot but i thought he only wanted to be friends. That was happening in September 2007. On the October 31 2007 something happened and i missed the last night bus – the stop was in front of his house – so he didn’t let me walk home. I spent the morning in his house eating spaghetti and watching family guy. this is how we started our relationship. In May 2008 we moved in together and in November i told him that i want a family as i am getting old – we were 31 at the time. He always loved children but i didn’t think about having any until i met him. He was very happy to ear that and we started working on it. On January 26 2009 i was at work and didn’t feel very well. I went to the pharmacy with my friend and bought a pregnancy test. Didn’t wait to go home and had it in the toilet at work. I knew i was pregnant, i just needed the confirmation. I sent a text to my bf and he called straight away. He was extremely happy and when i went home that evening he couldn’t stop kissing me and hugging me and making plans. My pregnancy was great. I was a bit nauseous the first weeks but it went away in the second trimester. I walked everyday and tried to be active but i put on lots of weight. I was 117 the summer before getting pregnant, 124 when i got pregnant and 172 when i went to the hospital for the induction. My son was very comfy in my huge belly and he was 12 days overdue. I felt like i couldn’t carry my belly anymore when i went to the hospital on October 12 and they told me that i had to come back on the 14th as there weren’t any free beds…I cried and i went back to the hospital on the 14th. The induction started at 11 but nothing happened. I had contractions but i wouldn’t dilate. It went on like that till the next morning at 9 when i had been given another pill and i started being in agonizing pain. I had to be on a monitor for 1 hour then they moved me to the labour room when i was given an epidural even though i was only 2 cm dilated. After that i was given oxitocin and started to dilate. The epidural would finish after about 2 hours and i would have to wait 20 minutes in horrible pains for the nurse to come give me another dose. I was very lucky to have my bf with me all the time. At 5 pm i felt like i needed to push and called the doctor. I was 9 cm dilated but my son has moved up and he was in distress. The chief of the clinic was called and after he examined me he told me that there is no way i can give birth naturally so i needed an emergency c section if i wanted my son to live. I signed the paper straight away and in 2 minutes i was hurried to the OR. I didn’t even had time to say “love you” to my bf…I was very scared and was shaking, my bf had tears in his eyes…The last thing i remember is having my belly covered in something orange. I woke up a few hours after that in a room with lots of monitors and beeping machines and people going around…I had 2 iv lines in my left arm and 1 line in my right arm. A very nice nurse told me that i need some blood as something happened during the surgery and i lost lots of blood. I was terrified for a second but she told me that my baby was ok and i was going to see him in few minutes. I managed to drink some water and felt so happy that everything was fine. I saw my son that night at 9 and i was the happiest I’ve ever been. On the 19th we went home and started our life as a little family as i like to call us.
I didn’t get stretch marks during pregnancy, but i have this scar to remind me how lucky i was to be living in these days and in a country with great doctors. My son was 8 pounds 7 oz at birth and after birth i found out that it would have been impossible for me to give birth naturally as my son was too big for my pelvis. My only issue is the fat that i still have on my belly, bottom and legs. I am 137 pounds now and would like to go back to the weight i had pre-pregnancy. It’s hard but i hope spring it’s going to help me. If i won’t loose the weight and even put on more – i want to have another child fairly soon – i won’t be very upset because my son is more precious and important than my image.
Believe in you and feel confident. Health and happiness are more important than a flat stomach or flawless skin. Enjoy your babies!

~Your Age: 32
~Number of pregnancies and births: 1 pregnancy, 1 birth
~The age of your children, or how far postpartum you are: Finn is 4 month, 1 week and 3 days old 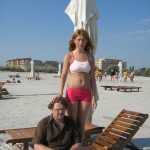 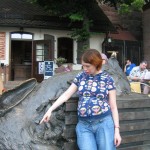 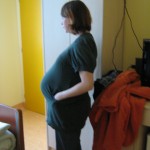 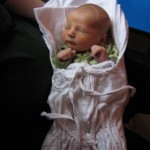 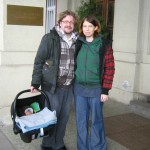 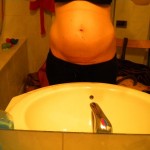 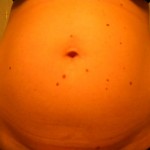 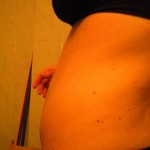 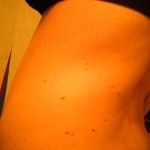 Previous post: 38 Weeks Pregnant, Not Sure What to Expect (Georgia)