My Rainbow Baby and VBA2C! (Shannon)

As you all know (since I post here frequently!), I lost my 3rd pregnancy. I have had quite the bumpy road as far as my babies go. Connor passed away 5 years and 5 months ago (his 7th birthday was on September 24th), I had my 2nd only a year later, lost my 3rd, and just gave birth to my 4th baby on 9/19, Emerson James! It was a successful VBA2C :) You can read my other posts if you have never read any of my stories.

Here is my birth story written by my husband:

Sunday Night:
We dropped Liam off at Megan and Steve’s house so he could play with Canyon. We left there at a little after 6PM. There was traffic because of a baseball game, so we did a little detour near northeasten. All told we pulled in at 715, right on the dot.

We were admitted to the maternity floor and had a really nice nurse (who had recently graduated from UMass). The next few hours was a combination of doctors (most notably the one with the purple hair clip) to convince you that the best way to induce was to do “the balloon” followed by some Pitosin. You were concerned that, should the induction not take, you would then be coerced into doing a C-section. During the course of this, you were inspected and determined to be 1cm dilated. Also, Purple Hair Clip stripped your membranes. The doctor’s seemed a little confused as they thought you were here for an induction and yet you didn’t want the induction at the same time. In the end, partially due to PHC’s 30% success rate estimate, you decided to talk it over with Dr McElrath, your primary OB/GYN. He wasn’t available at the time, so we decided to get a hotel in hopes that we could meet with him the next morning.

Upon leaving the hospital we checked out the Howard Johnson near Fenway, but there was a game that night so it was very loud (and probably booked anyway). I looked around and decided to stay at the Best Western at 1650 Commonwealth ave. We got into the room at midnight (just as breaking bad was picking up where we left off). We watched the rest of breaking bad, then went to sleep.

Monday
We woke up and, after a few phone calls, settled on meeting with Dr McElrath at 1245. In the meantime we went to Whole Foods and got some breakfast in the form of delicious sandwiches. We met with McElrath and you were just as indecisive as last night. Fortunately McElrath made the decision for you, telling you that your best chance was to wait until you go into labor naturally. We decided to go home and wait. Before we left, we had one of what would turn out to be many meals at the Mission.

We got home, where your mom was watching Liam and Molly. The rest of the night was uneventful. We got to tuck Liam in, which was nice.

Tuesday
You starting feeling contractions around 3AM. You timed them for a while and then woke me up and we left around 6AM. Traffic was pretty bad so I cut through Woburn and back out onto 93. That saved us a little bit of time, but it still took about 1.5 hours.

Once there the doctors inspected you (and you were still 1cm dilated). After a few hours they inspected you again, and not much had changed. They said to go walk around for a while to see if that got things going. So we went to lunch at the Mission again and then met Jenny at the park on Mission Hill right off of Birgham Circle. There you did some sort of exercises to try to change Emerson’s position in your belly. I read a book. It was nice.

After the park we went to get something to eat at the Mission again (I had left my credit card there… surprise), this time Jenny joined us. The bartender gave us a free drink on account of your ripeness, which was cool of him.

We then went back to the hospital, and they inspected you… still not much progress (you might have been a little bit more effaced and softer, but nothing huge). After some chatting they decided to keep you overnight to see how things went. They decided this partially because you were having strong contractions.

Wednesday
Unfortunately, the contractions died down by the morning. You might have been 1.5cm dilated, and slightly more effaced, but progress was slow. Instead of inducing we decided to stay the (new) course of letting your body do what it wants to do. We were discharged, had lunch at the Mission, and went home. We got home around 3PM.

Liam was down on the Cape, so it was just us. We got some La Caretta and then hung out for a bit while you took bath (right before which some of your mucus plug came out). Afterwards you said it would be great to get a hotel with a hot tub. We called around and settled on the Crowne Plaza Nashua. We got there at about 630PM. You immediately got in the hot tub (which was concerningly high off the ground… funny to watch your ripe self climb into it). You were overly aggressive with the bubbles and we (mostly I) had to scoop them out and put them in the standup shower. Afterwards, I joined you in the tub (which had jets that shot out at ~100MPH). Shortly afterwards you noticed something in the bubbles. You weren’t sure what it was but we narrowed it down to three possibilities:
You pooped
You lost the rest of your mucus plug
Your water broke
You called the doctor and they said not to be concerned and that it was likely the rest of your mucus plug.

The trip down to Brigham was an interesting one. I wasn’t sure if we were going to have enough gas, but I didn’t tell you at the time because you were having what appeared to be very painful contractions. Fortunately the gas was enough (barely) and the roads were wide open on account of the time, so we successfully arrived at Brigham at 2:05.

At admitting there was another pregnant woman when we arrived, and another one came in shortly after us. We all went up to the 5th floor of the CWN building (Center for Women and Newborns?). You were the last of the 3 to be brought to a room.

Once in the room, you were inspected and found to be about 4cm dilated at 80% effaced. Finally, we knew this was it and we were not leaving without Emerson coming out. In order to ease your pain and hopefully get you some rest, they gave you an epidural (something you were very excited about). During the epidural the anesthesiologist accidentally touched a wrong nerve, sending your right leg shaking. He said “What was that?” which, at the time, was discomforting. Afterwards we realized he was asking which leg it was (so he knew what it was he had touched). The rest of the anesthesia went off without a hitch and you tried to get some rest. The time was now around 5AM.

You got some rest over the next few hours, so not much happened. The nurse would periodically come in and check Emerson’s vital signs. Throughout the entire ordeal Emerson’s heart rate looked great, so again, nothing notable went on here.
Somewhere in midmorning you were determined to be about 6cm dilated. At this point I called Connie and Jenny to tell them they could come. They arrived late-morning and, after some chatting, you had them wait out in the waiting room until the time was right.
A little bit after noon you were inspected again and it was found that there was “just a lip” remaining. At this point the nurse got you getting ready to push. The next few hours was a slow progression with (what I presume to be) the usual milestones. Once it became clear that the head popping out was imminent, I was sent to fetch Connie and Jennny. They came in and watched. Your Mom prayed in the corner while I held your legs to “help” you push.

It’s worth noting that you pushed like a champ. Uncomfortable, but still cracking jokes. It was funny when they used a mirror to show you what was going on… you thought it was neat, but said you didn’t want to look in the mirror any more. As the head was out they asked if you wanted to touch it. You did, and you must’ve thought it was icky (kind of was), because you then wiped your hand on your gown.

Then you popped out the baby at 4:18PM. They put him on your chest right away, which you keep telling me was awesome (I love you baby… and I get it).
About 15-20 minutes post-partum Emerson latched on for breast-feeding. Maybe it had something to do with the skin-to-skin, but in any case, he was quite boss-like about it.

Attached photos are me 36 weeks pregnant with Emerson and my 3 boys on Connor’s birthday (Connor is on Emerson’s onsie!) 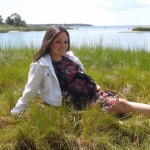 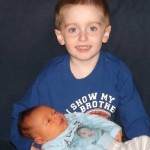