I have always been very skinny, being a gymnast I basically lived in a gym. I did gymnastics in college, which is were I met my husband. I got pregnant with my first child my jr year of college. She was a surprise as I had an IUD (copper), My body rejected it and I had to get it removed. I found out a month later I was 6 weeks pregnant with my peanut. I had a very stressful pregnancy, my husband was in the middle of a messy divorce, I was trying to finish school, and working. The pregnancy was very hard on my body, I was so sick the first three months I vowed to never have another child again. Before I got pregnant I was 118 pounds at 5’6 inches tall. I gained 54 pounds with my daughter most of which was water. I didn’t get a single stretch mark till after I had her, in a matter of a few days about 5 to be exact I lost 40 pounds my stomach shrank to quickly that I got shrink marks. ( as my husband calls them) After I had my daughter I was in love, I had never felt that instant love with someone before. I could hold her and stair at her for hours, she was my baby, and I loved her.

When she was three months old, my husbands company got sold and he was laid off. Three weeks before he was laid off I found out I was pregnant again, even though I was on birth control. My family wanted me to get an abortion since I was in my senior year of college and he had lost his job. I made the appointment but couldn’t go through with it. I have always felt that God has a plan, and he never gives me anything I can not get through. Even though I went through alot. We ended up moving from NC, to NJ where he finally got a job. He moved 2 months before I did, because I had to finish up my last semester in college. I was so stressed out, caring for a baby, being pregnant, finishing up school, applying for grad schools, having to pack our whole house, and move us alone. It was a lot. When I got to NJ, I didn’t know anyone. It was Dec 1st and freezing. I quickly joined a gym, as I have always loved to work out. With my son I gained 30 pounds. My delivery was pretty funny. I actually kicked the doctor out of the room b/c he wanted to give me a C-section for his own selfish will. I had a baby 11 months prior I knew what I was doing. I’m not sure if anyone else has exspeanced NJ doctors, but they are not the brightest of the bunch. The doctors did not listen to me when I said I needed to push, they told me it was two soon and they just checked me I was only 5 CM and that he wasn’t ready yet. I yelled at the nurse and told her he was coming, she tried to prove me wrong by checking to tell me I was still only 5 cm, and his head was crowning. She told me not to push, b/c the doctor was getting an OR. When your baby is right at the end you can not, not push, it is physcially impossible. He was out two seconds later, I pulled him out and held him right away. He screamed and latched on to feed before he was even cleaned off. He was my baby boy.

After I had my son I was ready to get back in the gym, with my daughter I was able to work out 2 days after she was born, but I felt so sick and run down with an almost 1 year old, and a newborn. IT took about 2 weeks before I got back into the gym. I did and still do work out 2 hours a day, 6 to seven days a week. It is Me time. With two babies, two step children, a house, husband, and grad school, I need me time, or I will explode… I’m only 24, that is a lot to take on. My sisters have been angry with me for working out, they don’t understand the good feelings that I get from working out. I don’t drink, I don’t go out, I don’t party, or do anything that my friends my age do. Yet they think it would be more exseptable to drink everyday then to go to the gym. NOw I don’t workout for the satisfactory of looking good, I just really enjoy working out. It makes me feel great, physically, mentally, and emotionally. I lost all my baby weight after about 3 months. Went back to a size zero, and started to look like my old self again. However, my boobs have dropped, they use to be “porn star” like according to my husband and they now look like tear drops. My stomach skin will never go away, when I bend over it makes a gross feeling flap. I have stretch marks on my stomach, which I have grown to love because they are my daughter, when she gets older I can tell her that they are for her. I hate that my body will never be the same. I know I look good for having two babies back to back, but i’m so use to a different body. 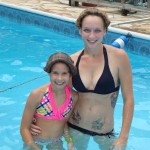 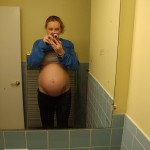 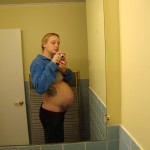 Next post: Feel alone, but trying to stay positive. (Sophia)