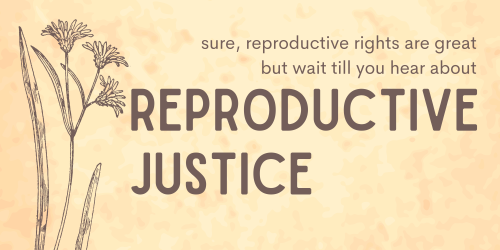 You are undoubtedly aware of the Reproductive Rights movement, which advocates for access to sex ed, birth control, abortions, and medical care during pregnancy and birth. And those things are absolutely very necessary for the health of individuals as well as for the society which those individuals live in. But those things are all rather limited in the grand scheme of things and as it turns out, we need to recognized the interconnectedness of all things not just through intersectional feminism, but through Reproductive Justice as well.

According to Sister Song, a respected source in the RJ movement since 1997, the Reproductive Justice Movement was named in 1994.

“Indigenous women, women of color, and trans* people have always fought for Reproductive Justice, but the term was invented in 1994. Right before attending the International Conference on Population and Development in Cairo, where the entire world agreed that the individual right to plan your own family must be central to global development, a group of black women gathered in Chicago in June of 1994. They recognized that the women’s rights movement, led by and representing middle class and wealthy white women, could not defend the needs of women of color and other marginalized women and trans* people. We needed to lead our own national movement to uplift the needs of the most marginalized women, families, and communities.” (1)

Many RJ sources quote Audre Lorde when she said, “There is no such thing as a single-issue struggle because we do not live single-issue lives.”

So what is Reproductive Justice, then? Sister Song defines it as “the human right to maintain personal bodily autonomy, have children, not have children, and parent the children we have in safe and sustainable communities (1).”

And what does Reproductive Justice look like? It includes awareness and advocacy not just for the same issues as the Reproductive Rights movement calls for, but also for environmental issues, prison reform, economic justice, LGBTQIA+ rights, and it also specifically advocates for the rights of people to have children if they choose – the US in particular has a long and dark history of forced or coerced sterilizations of people of color and disabled folx. So buckle up if you’ve got the spoons for this post, cause it’s gonna be a hard road to walk.

(And please remember, white, cis, straight, abled folx, that when I talk about “spoons” that is not for you in this case. It is your responsibility to learn this history and to share this history among your peers. Marginalized folx already know this and do this.) 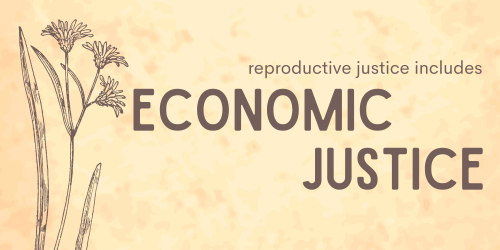 Already we recognize that the classism and racism in our culture is toxic and must be eradicated. But it becomes a Reproductive Justice issue when you also acknowledge that without universal, equitable healthcare, many cannot afford it (2). And if one cannot access healthcare, it logically follows that one therefore cannot access birth control, gestational and birth care, cancer and heath screenings, or healthcare for any children one has. Ms. Magazine has a nice little article up that notes how various aspects of economic injustice contribute to a lack of access to healthcare:

We also need to talk about the Hyde Amendment. In 1977, just four years after Roe V Wade, the US backpedaled in the name of “compromise” and “appeasing the Right” and enacted the Hyde Amendment which bars the use of federal funding for most abortions.

Anyway. Without federal funding, low income folx cannot access most abortions on their own. Which is why we have Planned Parenthood being known for abortions when their original goal was contraception, and the majority of their services are healthcare and cancer screenings.

“The [Hyde] amendment hinders the ability of all low-income women to terminate a pregnancy and disproportionately affects women of color, but it discriminates against Native women specifically because they are entitled to receive health services from a federal agency (3).”

I’ll do a post on what intersectionality is at another time, but this is a good example. Many Americans struggle to access healthcare. Women struggle more than men. Women of color more than white women. And, in this respect, at least, Native American women are impacted the most. Where their identities of woman and Indigenous intersect is where they are the most impacted. 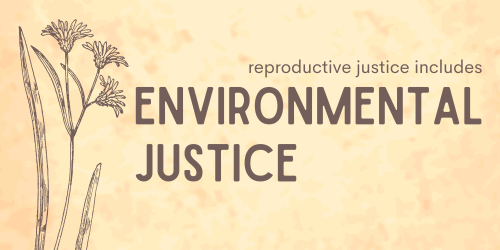 Environmental Justice becomes a Reproductive Justice issue when it interferes with a person’s rights or ability to have and raise (or to not have) a child. This is pretty obvious when you look at the communities struggling during and in the aftermath of major storms like Katrina or Harvey. As global warming continues and storms become more destructive (4) I don’t have to elaborate on how that will affect families, particularly poor families (of which BIPOC make up a disproportionate amount).

But things like the Flint water crisis are also examples of how Environmental Justice is a fundamental part of Reproductive Justice. Michael Moore reminds us that “you cannot reverse the irreversible brain damage that has been inflicted upon every single child in Flint. The damage is permanent (5).” Furthermore, residents’ reproductive organs may be affected (5). The City of Flint’s website does not have any updates on the situation past last July and this article by a PBS affiliate dated October 2021 notes that “As of June, just over 10,000 pipes have been replaced in Flint and the city’s website says it is in the final stage of replacement, but even still residents struggle to trust that the water is safe to drink (6).”

If people do not have access to a safe environment in which to raise any children they choose to have, they lack Reproductive Justice. Chernobyl, Fukushima, the BP oil spill in the gulf, the issues with the Cuyahoga River, current and future pipelines, etc…. It’s all included here.

And a reminder that while these events are global and affect many, many people, it is still BIPOC folx who are affected disproportionately because they are more likely to be living near these places, more likely to live below the poverty line and therefore have fewer options with which to remove themselves. Wealthy white people do not choose to build toxic places near their homes. (Eat the rich, by the way.) 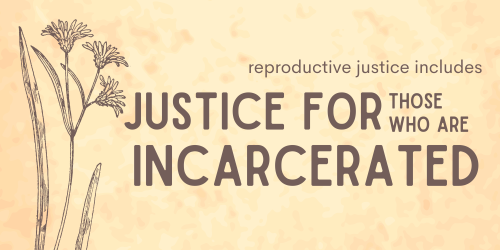 “Over half (58%) of all women in U.S. prisons are mothers, as are 80% of women in jails, including many who are incarcerated awaiting trial simply because they can’t afford bail (7).”

When pregnant people are incarcerated, it is still routine within the United States to shackle them during labor and birth despite no evidence that it is necessary. JAAPL notes that “Most incarcerated women are not violent offenders. . . and there are no known escape attempts among inmates who were not restrained during childbirth (8).”

And they say that “Currently, 22 states have some legislation restricting the use of shackles during pregnancy, with some of these banning shackling only during active labor and delivery (8).”

Once the baby is born, they are nearly always separated from their birthing parent in the United States. This is not, it turns out, the global norm. There are only four nations that routinely separate infant and parent: The United States, The Bahamas, Liberia, and Surinam (8).

The good news is that there are a few prisons in the US that are working to change this. NPR has a really lovely article about this, stating that “Washington Corrections Center for Women is one of at least eight prisons in the country that allows a small number of women who are pregnant and give birth while incarcerated to keep their newborns with them for a limited time (9).” These places aren’t like Orange is the New Black – they are safe and appropriate for babies and toddlers. They are built to be child- and family-oriented and studies have shown that they benefit for the baby and the parent (10).

Another problem unique to parenting while incarcerated is presented by The Adoption and Safe Families Act of 1997 which intends to get children out of the foster care system and into adoption as soon as possible. While perhaps a noble goal, for parents whose children are in foster care while they serve their time it becomes a risk of losing ones child altogether. If a child is in foster care for fifteen months of the previous two years, parental rights are terminated (8).

And a quick reminder here that prisons are literally modern slavery, per the Thirteenth Amendment of the US Constitution. According to Wikipedia, “While the United States represents about 4.2 percent of the world’s population, it houses around 20 percent of the world’s prisoners.” Putting all of this information together together makes the whole situation look kinda sus tbh. 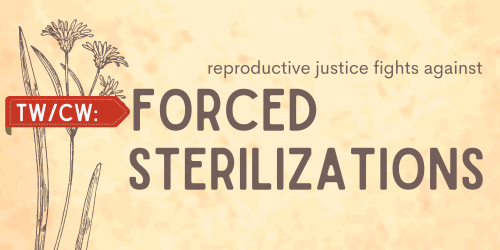 Ah, joy of joys. I’ve saved the most fun subject for last. (That’s sarcasm, this is the least fun subject. Maybe. Maybe they’re all equally horrific. The United States is a flat-out dystopia.)

Did you know that the Nazis quite literally modeled their eugenics program after the United States? After California, specifically, in fact (11). Yeah. Gross.

“Beginning in 1909 and continuing for 70 years, California led the country in the number of sterilization procedures performed on men and women, often without their full knowledge and consent. Approximately 20,000 sterilizations took place in state institutions, comprising one-third of the total number performed in the 32 states where such action was legal (11).”

This was a program that specifically focused on the Disabled community. Justice Oliver Wendell Holmes famously said, “Three generations of imbeciles are enough” when a disabled woman whose mother was also disabled was sterilized after having a child (11).

But they didn’t limit themselves to just Disabled folx, they also sterilized minorities. There are noted examples in Puerto Rico (11), and in Los Angeles among Latina women, many of whom were forced to sign papers in a language they did not speak or read while in active labor (watch the documentary No Más Bebés). Time Magazine notes that in the 1970s, at least 25% of Native American women were sterilized, but the numbers are actually likely higher (12).

But the worst part is that none of this is ancient history (not that 1979 is ancient history…). A number of incarcerated women were sterilized without lawful consent in California in the first decade of this new millennium (13). And don’t forget that as recently as 2020 it came to light that ICE was sterilizing immigrant women without lawful consent (14). 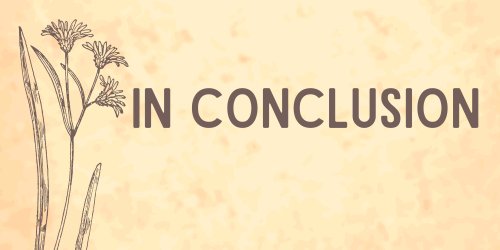 Access to good, complete sex ed, and to abortions and birth control, as well as to gestational and birth care are absolutely necessary. But, proportionally, white women deal with these other issues less often. And, historically, we tend to forget (or worse) about others when we are doing activism. Hence, Reproductive Justice was born. Just like how feminism isn’t truly feminism if it’s not intersectional, the fight for reproductive freedom means nothing if we don’t remember to include all of these other aspects of being a human.

Additionally, we must also remember to include LGBTQIA+ issues in our work – but there has not been research done on, for example, trans fathers in prison (also we need to research that and other niche areas). Remember that queer folx need access to birth control and abortions, too. Remember that some men give birth.

None of us are free, while so many of us cannot access their basic human rights. Take this information and share it and together we can begin to fix this mess we call a society.

Fellow white folx, please remember: While it is absolutely imperative that we make Reproductive Justice a priority, we must remember that it is not our movement. As allies, we should share information, but never speak over BIPOC or any other marginalized community, particularly in a movement they started.

If you’ve read this far, you’ve earned a cookie. 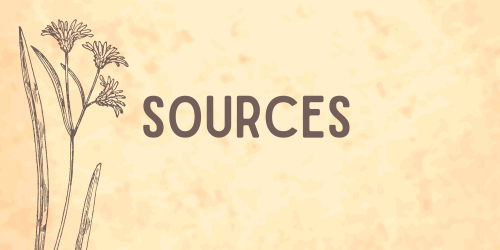 7. Bertram, Wanda, and Wendy Sawyer. “Prisons and Jails Will Separate Millions of Mothers from Their Children in 2021.” Prison Policy Initiative, https://www.prisonpolicy.org/blog/2021/05/05/mothers-day-2021/