I Control My Body, My Body Does Not Control Me! (Danielle)

No one ever told me anything about what happens after pregnancy – the fatigue, depression, mood swings, bleeding for weeks, body changes – the list goes on. I was prepared for my baby, but not prepared for what pregnancy did to me.

I got pregnant with my daughter the month I turned 31. It was the first month we tried and my husband and I were ecstatic. I don’t remember much about the pregnancy except the fear and the aches and pains toward the end of the pregnancy. I have been a runner since the age of 19 and so continued to run while pregnant. I ran up until I was around 32 weeks along. In the end, I gained 40lbs and got severe, sudden onset pre-eclampsia and had to be induced. My beautiful baby girl was born healthy and full-term at 37 weeks weighing 5lbs 11.5oz, 17in long. She is the joy of my life.

After her birth, I continued to have high blood pressure for a couple of weeks and developed PPD along with strange looking bruised spots on my lower legs which I later learned can be caused by high blood pressure. I was unable to breastfeed my daughter because the doctor gave me water pills which dried up my supply. This didn’t help with my depression. I had suffered with depression before, but nothing prepared me for PPD. I do not believe in taking anti-depressants so I handled my PPD the way I always handled depression – I ran.

At first I thought the running was going to kill me. I remember the first time I tried to run I barely made it 100 yards. I could feel my tummy jiggling and that really upset me. I wondered if I would always feel that and I had thoughts of giving up and accepting failure. But I kept trying to run, even holding my tummy and wearing tight fitting pants to hold it in. Eventually I could run a mile, then two, then three and more. And eventually my tummy stopped jiggling.

In 3 months I dropped all of the pregnancy weight (I had 25lbs to lose) and, though still slightly depressed, I felt more like myself than I had for six months prior. Around that same time I ran a 10k and finished in an hour flat. It felt good! By 6 months postpartum I weighed the same as I did prior to becoming pregnant and was a whole dress size smaller.

I got pregnant with my second child almost two years later. This pregnancy was a lot more memorable and I was very comfortable with being pregnant. I took belly shots and documented the pregnancy up until the day I delivered my son at 39 weeks. I gained 35lbs and, as with my first pregnancy, I ran up until I was 32 weeks along, but, unlike with my daughter, I continued to walk every day for 30 minutes until he was born. There were no complications with his delivery. He weighed 6lbs 13oz and was 19.5 inches long. He is the love of my life.

This time I lost all of my pregnancy weight by 4 weeks postpartum. I believe it was because I pumped for four weeks to give my son as much breast milk as I could. I did not get PPD either. Instead, I felt amazing! I started running again at 2 weeks postpartum. A month later I added toning exercises. I currently work out 45-60 minutes a day, five days a week, and vary my workout between running, cycling, step aerobics and body toning exercises. Do I have to work out so much? No. I could keep my body looking like it does working out half that much, but I LOVE working out. It is time for ME and I feel powerful when I do it because I know that my body doesn’t control me – I control my body.

I am now 5 months postpartum and weigh the same as I did pre-pregnancy. I did not get any stretch marks from either pregnancy and the extra skin I do have is minimal. I do remember having less extra skin after my first pregnancy than I got this time around and it upsets me a little, but I know that if I continue to watch what I eat and exercise that the skin will eventually return to how it was pre-pregnancy, just like it did after my daughter. I started out a C cup and with each pregnancy, went up to a DD cup, and then back to a C cup. The only thing different about my breasts is that they are a little less perky, but otherwise look the same.

My only complaint about my body now is that I have spider veins in my lower leg and still have those strange bruise-like spots on one calf. I plan on getting laser vein treatments but am waiting until I know for sure if I will try for a third child. My doctor told me the veins are genetic, but considering the other genes I could have inherited, I am not complaining.

I could not find any photos of me pre-pregnancy for comparison, but I can tell you my body looked the same about six months after my first baby as it did pre-pregnancy. 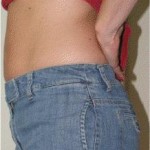 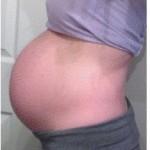 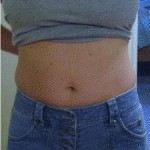 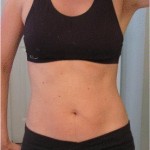 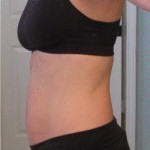