When I become pregnant with my daughter it was a total surprise. Luckily I had an easy pregnancy, only got sick a few times and worked up until I was 38 weeks. When I found out that I was pregnant I was 5’4″ and 120 pounds. A little on the heavy side for myself, but still at a healthy weight. Pre pregnancy I fluctuated anywhere from 110-115 pounds. I ate whatever I wanted while I was pregnant but didn’t overindulge. I ate when I was hungry, and stopped when I was full. I gained weight slowly at first but then into my third trimester it really picked up. The day I went into labor I weighed 143, so a 23 pound weight gain total.

I had always had small breasts, but proportionally they looked fine on my small frame. I was a B cup pre pregnancy and a large C throughout my pregnancy. When my milk came in I was a DD. My pregnant belly always was on the smaller side, when they measured it at my appointments I usually was measuring anywhere between two and four weeks behind schedule. I even had an ultrasound to check and make sure my daughter didn’t have growth retardation. I was told that since I was on the small side myself it was likely I would have a small baby. Because of the fact my belly was generally smaller than average, and I gained my weight so gradually, I attribute that to the fact that I didn’t get a single stretch mark on my tummy. My breasts are another story altogether however. I call them “tiger boobs” because they are so covered in stretch marks. My daughter was never able to latch so I pumped exclusively for two months until my milk dried up. When my milk went away I went back to a B cup. My breasts are still perky, but feel less dense. They are definitely softer, but aside from the stretch marks they look nearly exactly the same as they did before.

I went overdue with my daughter and was set to be induced on a Wednesday. On Sunday night I had horrible contractions that made me double over in pain, they finally went away so the next night when I had them again, I thought that they would just go away. They started Monday morning at 2 am, by 9 am I couldn’t take the pain anymore and was begging my husband to take me to the hospital, if nothing else I could get something for pain to hold me over until Wednesday. We went to the hospital and hooked my up to the monitors. I was 3 cm dilated (I had been 2 cm for weeks). They left and said they would check back in an hour to see how I had progressed. After 45 minutes I hit the call light in tears begging for some relief from the pain. They checked me again and I was 5cm, they then admitted me. I was expecting to be sent home, so I was definitely in shock that today would be the day. I got the epidural at 12 pm and from there it was smooth sailing. At 4:32 pm after pushing for 3 contractions my sweet girl was born weighing in at 7lbs 1oz. Up until I pushed, I was told she was ‘definitely small’. She was so beautiful and I was instantly in love.

I wore a post partum belly binder for a few weeks. My belly was flat after six days but still felt like mush. It took about two months to feel firm again. At 5 weeks I was working out again. I weighed 133 when I came home from the hospital, 117 at two months post partum, and 107 at three months postpartum. I now fluctuate between 105-108. I run about 16 miles a week, and watch what I eat, but overall I am happy with my body. I gave another person life and that is the most miraculous thing a body can do. I didn’t have expectations to look exactly as I used to so I can’t be disappointed.

I used to check this website religiously throughout my pregnancy, I wanted to see how pregnancy affected other women, I was nervous but I knew that giving new life and being a mother was the most important thing. To say that pregnancy didn’t change my body would be a lie. I do think that genetics and age play the largest role in your transformation though. That’s why I never slathered myself in cocoa butter or bio oil. I knew if I was going to get stretch marks that’s just the way it would be, and it was useless to worry about it. The picture of me in the pink bikini is pre-pregnancy. I weighed 112 in that photo. The photo of me in the green sweatpants is six days after giving birth, I swear by the belly binder for making your tummy go back down quickly. The next is a side by side comparison of 39 weeks pregnant and two months post-partum. Two months is when I began to feel good about my body again and my tummy started to firm up, I was about 115 in that photo. The last photo is of me four months post partum weighing in at 106. I’m now at a point where I’m just trying to maintain my health. If anyone has any questions please feel free to ask. I know how much this website helped me and I just want to help others in their journeys into motherhood. :) 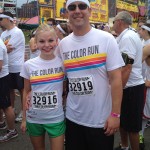 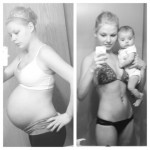 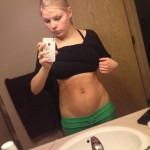 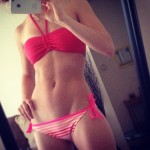 Previous post: Loaded with fat and a belly that won’t go away. Looking for advice and input. (Anonymous)