I have had a love/hate relationship with my body for as long as I can remember. I grew up in a fairly volatile home – my bio dad passed away when I was very young and my mother remarried when I was six. My step dad and I always had a tenuous relationship – we fought a lot and he was quite verbally abusive – physical as well. I grew up hearing about how ugly, stupid, rotten, ungrateful and horrible I was. I believed every word. As I got older, I felt out of control and unloved in my own home. However, I learned early on that I could control one thing – my food and my body. I became obsessed with staying thin. I am a small person (only 5’2″) and have never thought I was thin (or good) enough. When I was in junior high I started dieting (though to be honest I remember watching my weight as early as 4th grade) and by high school I pretty much stopped eating. I would subsist on gum. I realized that I was only hungry if I actually ATE something – so I avoided food and tried to make it on as little as possible. I was never diagnosed with an eating disorder per se – but then again no one really knew the extent that I was avoiding food. On the flip side – when I finally did eat – I would binge. Entire boxes of cookies, or bags of candy – falling into a cycle of fast food and junk. Eventually I would begin to gain weight and I would start the process all over again. When I reached college age and moved out of the unhealthy environment of my parent’s home – I started to eat A LOT and gained quite a bit more then the freshman fifteen. I was traumatized and decided things were going to be different. So I cut back on the junk and began to exercise. Exercising changed my life. Unfortunately, I become obsessed with that too. If I thought I was going to miss an day of exercise I would become depressed. I restricted my food and increased my exercise. I was very thin – but it was never thin enough. I followed this pattern well into my twenties. Then I got pregnant. I gained quite a bit of weight quickly only to miscarry around 9 weeks. I was devastated – the loss of the pregnancy coupled with the weight gain completely set me off. I spent several weeks working out like crazy and eating little to regain control. I then got pregnant for a second time about 3 months later – and this one stuck. I gained almost 50 pounds with my son and it took me many many months to lose it. As soon as I could I started exercising again and making terrible food choices – lots of junk with salt and sugar. I finally lost the weight and got back to my pre-baby size – I felt really good about myself. While I was never able to truly kick my food/exercise cycle I was able to go about my life without constantly worrying about my appearance and what others thought. Five years later I had my second child and went through the same process as the first. I returned to the gym and took my first exercise class when my daughter was exactly 8 weeks old. I only felt in control at the gym – the rest of my life was a disaster with two kiddos, a husband that worked constantly and a touch of postpartum depression. Despite all of this, I quickly lost the 40lbs I gained with my daughter. I was so proud to put on my bikini that summer (i was 35) and show that I still had it. That was until I received an email from a girlfriend that said “women our age shouldn’t wear bikini’s – they look good on NO ONE.” I was immediately chastened and from that moment on never wore a bikini again. It was like someone had taken every insecurity I had and put it on display for the world to see. “I am fat, ugly and have been making a fool out of myself at the pool for the past 5 years.”

I wish I could say I walked away from that email and followed my own path – but I didn’t. I actually lost hope – stopped exercising – and decided she was right. I was old, fat and ugly – why bother. I gained 10lbs (which is a lot when you are short) and just felt discouraged. I spent a summer lounging at the pool in my tankini wishing I hadn’t spent the 10 years prior looking a fool in my bikini. However, this was not me. I went back to the gym, got healthy and lost the extra 10lbs and a few more. I felt better about myself. I felt almost (which is huge) in control of my eating and exercise. I felt like I could be thin, be healthy and NOT be obsessed. I will be 40 in July and feel like I am finally reaching a place where food and exercise do not control me. Don’t get me wrong – I still work out 5 times a week and watch what I eat – but I don’t let those things run my life. If I miss an exercise class or eat too much food I don’t spend days obsessing over it – I move on and realize that tomorrow is another day to make better choices. I recently traveled to Mexico with my family to celebrate some big milestones – my upcoming 40th birthday included. I felt happy and at ease with myself and my body – and purchased a new bikini for the trip. Maybe my girlfriend was right – and a women of my age shouldn’t be showing what two kids and a lifetime of gravity does to a body – but then again – maybe she was wrong. I had my husband take some pics of me just so I could remember what I looked like on this trip – and see the fruits of my labor – the Zumba, the Kickboxing, the Toning – and most importantly to realize that no – I’m not 20 – but I still look pretty darn good. I’m proud of myself – of my body – and the steps I’ve taken along way to minimize my bad choices and not let food or exercise (or really – what anyone else thinks) run my life. So – here I am – in my bikini at almost 40 – ready to share with the world my journey. Thanks for giving me a voice – even if I’m not quite ready to show my face. :-) 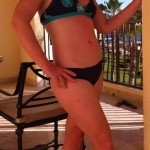 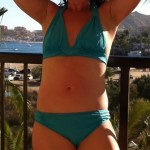 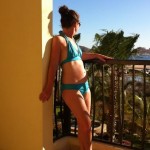 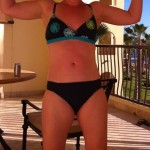 Previous post: Obsessed with how I should have done better (Anonymous)