my husband took this picture of my pregnant belly last week — 34 weeks pregnant with our second. it’s an artistic shot, not a realistic one, so you can’t really see my stretch marks and i look thinner than i really am. i will try to put up a more realistic one soon, maybe after this baby comes. but this picture is very symbolic for me, of healing and blessing. 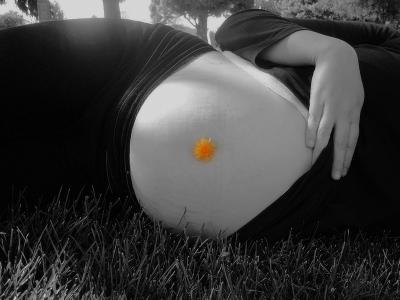 this website has been such a blessing for me. i return over and over to see pictures of real women, those who look like me, and those who don’t.

i’m a student midwife so naturally i planned a homebirth with my first child. i had a fairly uneventful pregnancy. i started out around 230 pounds, but i am 5’11 and was able to hide a lot of that weight. my midwife was shocked that i weighed that much. i basically was healthy despite my weight. i had a very difficult time gaining weight and ultimately only gained 13 pounds. my son was over 8 pounds at birth so he took what was available! after my pregnancy i went vegan and lost 40 pounds in a year. i was still losing weight, becoming more active, and continuing to improve my health, when we decided to have another baby. i began this pregnancy at 190 pounds…not great, but not as bad as last time. many of the issues i had with my health in the first pregnancy did not apply to this one, although i would still say this pregnancy was harder. i committed myself to a healthy weight gain and have gained 20 pounds so far. it has been very difficult for me psychologically to gain this weight. i am so afraid that i will end this pregnancy exactly where i was 18 months ago and that i will never achieve my goal of a healthy weight.

i would like to say that i had a beautiful homebirth, but i did not. my son’s head was tipped back and despite everyone’s best efforts, i was in labor for 60 hours, with contractions at 3 minutes apart for 45 hours of that. at 59 hours i was still at 7 cm. and nearly delirious from exhaustion and pain (the pain being primarily from back labor because of the position of my son’s head — the contractions themselves were nothing!). i chose to transport to the hospital.

ironically, the bouncy car ride was all my son needed to straighten out. by the time i was given a room, i was in transition, and i gave birth about 20 minutes later. despite having an unmedicated birth, essentially normally, it was hell. i went from my calm, quiet home, where the only people there were people i requested, where i had labored in my own space, in my own clothes, in my own way — into a hospital where i was treated hatefully and with disdain. my body was abused. the nurses said horrible things about me, to my face and in whispers to one another. my husband was yelled at. many things were done to my body and to my son without my consent, and sometimes directly against my wishes. i was physically held down when i attempted to be upright. i was forced to push on my back. i was examined without my consent and without anyone even telling me they were going to do it — that was far more painful than the contractions i was experiencing and such a disgusting violation. i didn’t understand the meaning of “birthrape” until i experienced it myself. luckily the birth itself was precipitous…seven minutes of pushing. i loved pushing. i pushed my son out exactly as my body told me to do, ignoring the nurses’ orders to pull my legs back and push to a count of 10. i was very lucky that i ignored their demands. my son had a nuchal arm and that, combined with how fast he came, barely gave me a simple 2nd degree tear, very easily repaired and healed. but i am quite certain that if i had pushed the way they were ordering me to, i would have blown my son right through my perinuem and likely through my rectum and i would be a different woman today.

it took a very long time for me to heal from my son’s birth, physically and emotionally. my son was kept away from me for hours. i was so committed to nursing, and i went through unbelievable hardship in my attempts to nurse, but was ultimately unsuccessful. i had donated breastmilk for which i was profoundly grateful, but i hated myself so much for my failure to provide for my son. i disassociated from him for a long time at the beginning and had a terrible postpartum depression for a year. i didn’t trust myself as a mother because i had been so incapable of protecting him in the hospital and feeding him the way i knew best, the way i ached to feed him.

my son is 18 months old now and is the most awesome little kid. i love him so passionately. he has blue eyes and long reddish hair and skin so soft you could cry for how perfect it is. he is intelliegent and funny and easy-going and basically shows no sign of how unbalanced and hurt i was during his first year of life. i am still working to heal from his birth, but i know now that i’m a good mother because of how i mother, not because of how i birthed him or how i fed him as an infant. so many things were out of my control in both of those issues but i know that i did the best i could. as a student midwife i meet women every day with experiences like mine and i know that i am not alone in my heartache OR my strength.

so now i am 34 weeks pregnant with my second, and planning a homebirth again. i have learned many, many lessons. i am such a completely different person than i was before i had my son. i am still ashamed of my weight, because i did this to myself through improper eating and self-care. but i’m not the least bit ashamed of my belly, with its sagginess above my pubic line, or my breasts, which did NOT get smaller after pregnancy, much to my dismay! i’m not ashamed of my stretch marks. i am very fair, so i only had a few the first time, and they all came after my son dropped, so they are very low, even into my pubic hair. the ones around my belly were very faint, again, i think due to my skin tone. but with this pregnancy, with a normal weight gain and a much more active baby, i’m having more stretch marks, and they are darker, and the ones from my son, that had more or less disappeared, have reappeared darker and thicker. but i love them. we mamas are warriors and no warrior comes through battle unscarred.

i will post a post-pregnancy picture after i have this baby and that likely will NOT be artistic. you will see me in all my naked, stretch-marked glory. i hope and pray that the picture i post at that time will show my child at my breast, where s/he belongs.

thanks for listening, and thank you so very, very much for this site.