All in due time – There is hope (Joss)

I had my first child when I was 18. Before her I had a beautiful body, that I was proud of. (Of course most 18 year olds do) After I had her I had NO idea what i was “supposed” to look like or what it was going to do to my body. I wish I had found this site back then. I was so depressed I refused to look at Victoria Secret catalogue’s or associate myself with anyone who could wear a bikini. I was beside myself because of how “messed up” my stomach was. Fast forward a year and I was still so upset about how I looked even though looking back NOW, my stomach looked fine. I swore and knew I was never going to show my stomach to the light of day or public ever again. I had two more children over the last 6 years, and of course my stomach has only gotten worse. (Saggier) I walked around with a heavy weight on my shoulders year after year, and became a single mom. I was depressed for so long. I always felt like no one would ever want me and I wasn’t good enough.

Between a major depression, anxiety, and agoraphobia, I started practicing meditation and exercising (which miraculously pulled me out of that state) I found a happiness with myself again. Which in turn had its affects. I have a much longer story but my main point of this post is to let all the beautiful mommies out there know that it’s ok to be in your skin. It took me 4 years after my last child born to accept my body. A big influence was pole dancing (I’m not saying that’s what you need to do, to feel better about yourself) But it was my outlet and helped me gain my confidence back. I found this site probably 6 years ago and I checked in on it over the years to hear other woman’s stories, to not feel alone. Today was the day I felt like it was appropriate to tell my story , since yesterday I wore a bikini at the pool for the first time in about 10 years. I was scared about the looks I’d get and it felt so uncomfortable, but I f****** did it! I didn’t care what anyone thought. I was a mommy, and I had my three babies with me and we were having fun in the sun. It was a liberating feeling! If people didn’t like it, they didn’t have to look at me.

I actually bought a top that shows my stomach a little bit. I’ll find somewhere to wear it. Lol
I woke up this morning and felt skinny and took a picture. In this picture I’ve had 3 children and my last is 4 years old. The skin on my stomach isn’t pretty or “tight” anymore, but I’m happy with my body, it doesn’t matter what the rest of the world thinks. I wish anyone who reads this, a new found love for their mommy body. I hope to be an advocate for mothers who’s bodies are “different”. Sending positive vibes and love. 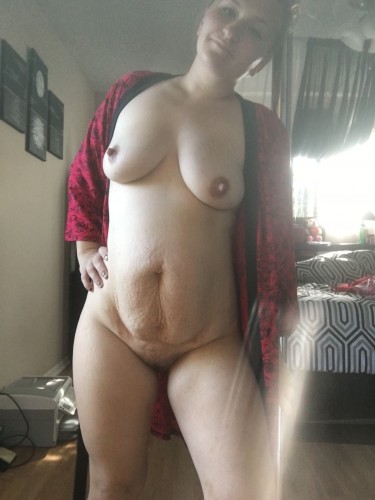