Originally posted over at BethanyActually.com back in November.

I’ve said it more than once: I don’t do belly shots.

I’m grateful to have had two healthy pregnancies. I have seen too many friends and relatives struggle with infertility and grieve over ectopic pregnancies and miscarriages to ever take my relative ease in getting pregnant and carrying babies to term for granted. I think it’s amazing that my body is equipped, like all mothers’ bodies, to do such miraculous things as grow, birth, and nurse babies. I think a pregnant woman’s body can be beautiful, and I don’t mind other people’s weekly belly shots a bit.

That said, however, I will confess: I don’t take photos of my belly mostly because I don’t like being pregnant at all. It’s a means to an end for me. I don’t like feeling the baby moving around—it’s usually uncomfortable and sometimes downright painful. Maternity clothes annoy me beyond telling. It drives me crazy how absent-minded and butterfingered pregnancy makes me. And can we talk about how much I hate sleeping on my side? I hate it with the fire of a thousand suns.

Before Troy and I were parents and people asked how many kids we wanted, I always said, “We’ll have one and see how that goes.” When Annalie was born, I remember thinking just minutes after, Yeah, I could do that again someday. Giving birth wasn’t exactly the most fun thing I’ve ever done, but I did it and when I was done I was proud of myself.
Breastfeeding wasn’t exactly a picnic at first. Annalie being a tiny preemie made it a challenge from the start. Added on top of that, she had a not-quite-right latch that went uncorrected so long that it affected my milk supply and led to weeks of pumping and using a supplemental nursing system which was just as fun as you might imagine. (No fun at all. I should blog all about that someday.) But I was determined to succeed, partly from stubbornness and partly because I am lazy and breastfeeding is so much less work than bottles, whether they’re used for pumped breastmilk or formula.

Eventually, we realized we were going to have to supplement the nursing with a few ounces of formula per day. I gladly said good-bye to the SNS and we reluctantly added one bottle-feeding to our day. It affected how often Annalie nursed each day exactly zero. She still nursed every hour or two, night and day, till she started eating solids a couple of months later. Then she cut out maybe one nursing session per day. She didn’t sleep through the night till she was 13 months old, and she continued nursing till just past her second birthday.

I guess what I’m trying to convey is that although I don’t like being pregnant, I do appreciate other parts of having babies. Giving birth was painful but amazing. Breastfeeding was difficult at first but we stuck with it, found our groove, and I daresay we became experts at it. So although I have been grumping my way through this pregnancy and pointedly not taking weekly photos of my growing belly, I am looking forward to meeting our second daughter and enjoying her babyhood in a way I couldn’t with Annalie because this time I have experience under my belt.

Last night, as I passed by the mirror in our bedroom just before going to bed, I caught a glimpse of myself in the mirror and the cozy-looking room beyond me. I remembered this photo of Jen’s and grabbed my camera. Here’s hoping I won’t have many more opportunities to take photos like this one before we meet our baby girl. 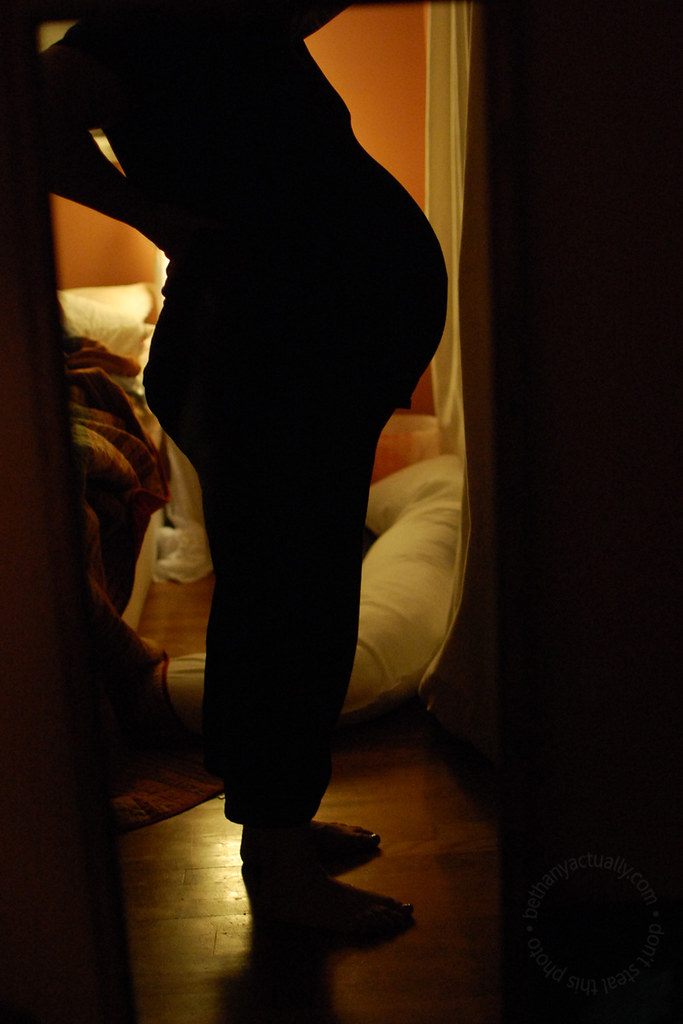