My story starts about four years ago, when I met the man of my life. Shortly after dating we decided to get married, and start a family of our own. We were wed in August 2006, and then in November 2006 found out that we were expecting a baby! I didn’t gain much weight up until the 6th or 7th month of the pregnancy — it seems like I got massive overnight! I gained a total of 50lbs, and had a very large, pointy belly, and ended up giving birth to a healthy 8lb 8oz baby girl at 42 weeks gestation. My stomach looked pretty bad for a long time, I used to call it my jello-filled fanny pack…. hehe Because I had such a large belly my bellybutton obviously popped out, and never went back in. I guess I am at fault for not working out and whatnot, so my stomach never looked very good after that. Then a year later we decided that we were ready for another baby, and found out in October that we were actually expecting identical twins! To be honest I was very upset upon learning that, I mean, it’s scary when you start thinking about all the complications, risks, etc, that come with bearing twins. I knew I was going to get very large, and be in a lot of physical pain. It was a long and strenuous pregnancy, having to travel twice a month to a specialist, one hour drive from home, one hour drive back home. They had to closely monitor me for gestational diabetes, high blood pressure, and twin-twin transfusion. I had a lot of pain just about everywhere –I grew incredibly large, larger than I ever imagined…. at around 32 weeks gestation I measured 48″ around! The doctors wanted me to make it to 37 weeks gestation, but at 35 weeks I learned from an ultrasound that there was a 17% discordance between the twins, twin A being about 2lb smaller than twin B (twin A also being breech). So the next week, at 36 weeks gestation, I went to my regular obstetrician to schedule a c-section, and at 11:30am that morning I found out I was having a c-section at 6:00pm that night. Everything went very well, although I was completely stressed out, insecure, having all the fears in the world. At 6:05pm our baby boy Jesse was born, followed by his brother Jeffrey at 6:07pm. Jesse (twin A) weighed 6lbs 0oz, and Jeffrey (twin B) weighed 6lb 1oz. It turns out that the ultrasound technician who had performed the ultrasound at week 35 was in training, and didn’t measure things quite right, making us believe that our babies were sick. We are happy that our family is complete, having a girl and two boys. I am hating my postpartum body more than ever now, I have so much excess skin, stretch marks, you name it I have it. And some poor lady at the grocery store asked me when I was due, to then be informed that I’d had twins one month earlier….. hehe I have been a big fan of girdles and shape forming underwear since the birth of our first child. I’m unhappy with the way I look. But I tell myself that all this doesn’t matter. That my body is what has given me all these beautiful babies.

Picture #1 : Nine days before giving birth to my first child
Picture #2 : A year and a half after giving birth to my first child, and right about when I got pregnant with our twins
Picture #3 : The morning of my c-section for our twins, at 36 weeks gestation
Picture #4 : A week after our twin boys were born by c-section
Picture #5 : My beautiful two year old daughter
Picture #6 : Our adorable three month old twin boys 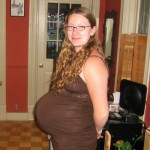 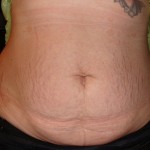 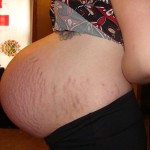 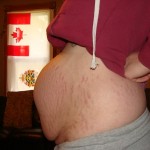 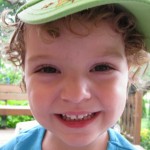 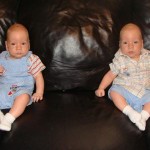