When I was 16 I went onto birth control pills. By the time I was 19 I decided to get off them. After this, my period was never the same. It was so sporadic that my Doctor told me it would be hard for me to conceive. My fiance and I decided to stop using protection and went with “if it happens it happens”. Fast forward 13 months, I became pregnant. Unfortunately, I lost the pregnancy very early on. The Doctors called it a chemical pregnancy. Basically, if I didn’t take the test so early, I would have never known I was pregnant I would have just thought it was a period. I was pretty depressed about it and my fiance knew it. Right after that I decided I would take care of my body a little better and I started working out and eating healthy. I went from 150lbs to 130 lbs in just 2 months (I am only 5’4″ so 150 was a lot for me). I stopped loosing weight because I missed my period that month and I became pregnant! I started at 130lbs and ended up at 160lbs when I delivered. My son decided to come early at 34 weeks. I just randomly started having contractions. I had an all natural med free birth and it was amazing! I never really understood my body until that day. My son was born at 4lbs 4.5oz and 17″ long. He was fully mature and did not even go to the NICU. I am now at 142lbs and 10 months PP. My belly is very much looser but I am hoping it will go away once I start working out again. I am just lucky that I did not get one stretch mark. The pictures where I am wearing the red underwear with hearts is me today at 10 months PP. The one of my pregnant belly is when I was 33 weeks, 1 week before I delivered (everyone says it is a tiny belly but hey I gained 30lbs for that!), and the last picture is of my son Roscoe about 12 hours old. 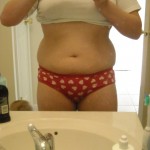 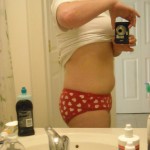 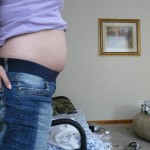 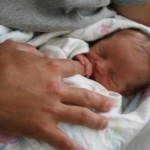 Next post: I Want to See it as Beautiful (Anonymous)